Can A Harasser’s Remarks About His Sex Life Create A Sexually Hostile Work Environment? 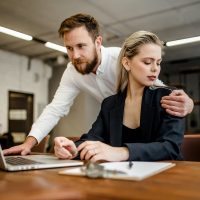 In Karamatic, a woman named Karamatic brought a sexual harassment claim against her former employer, Peyton Resource Group, LP (PRG), pursuant to Title VII. Karamatic claims that she was required to work in a sexually hostile environment in violation of Title VII.

Karamatic worked for PRG in a managerial role. About a month after she started, PRG hired another manager named Pendleton to manage another department. In the following months, Pendleton allegedly made a variety of inappropriate comments at work, including descriptions of his own sexual activities and comments about other female employees. Karamatic alleges that Pendleton repeatedly described his sexual encounters to her in one-on-one meetings and that Pendleton continued to make remarks about his own sexual activities in one-on-one meetings after she repeatedly asked him to stop.

Karamatic reported Pendleton’s sexual behavior multiple times to her supervisor, Mayhew. When she complained a second time, Karamatic claims that Mayhew acknowledged that he had spoken to Pendleton about the inappropriate conduct and may have needed to do so again. Karamatic also alleges that in at least one instance, Mayhew joined Pendleton in a sexually inappropriate conversation about a female employee. Ultimately, Mayhew allowed Karamatic to work from home to avoid Pendleton. A few weeks later, Mayhew presented Karamatic with a new employment agreement that reduced her total compensation and adversely altered certain commission calculations. Shortly thereafter, PRG terminated Karamatic’s employment.

One of the most important decisions sexual harassment victims must make is which employment law attorneys to consult with regarding their rights under federal employment discrimination law. As part of our dedication to helping sexual harassment victims, an experienced employment law attorney will speak with you personally and you will receive the individualized attention your case deserves. We offer free confidential case evaluations for employees, and you will not have to pay to speak with our employment discrimination attorneys regarding your rights. We are available for consultation at your convenience, including scheduling telephone consultations for evenings and weekends.

Based in Ocala, Florida and representing workers throughout Florida, our sexual harassment attorneys in Citrus County, Florida have dedicated their practice to fighting for the rights of employment discrimination victims. If you have been sexually harassed at work or have questions about your rights as a sexual harassment victim, please contact our office for a free consultation with our sexual harassment lawyers in Citrus County, Florida. Our employee rights law firm takes sexual harassment cases on a contingency fee basis. This means that there are no attorney’s fees incurred unless there is a recovery and our attorney’s fees come solely from the monetary award that you recover.