Can a Severance Agreement be Used as Evidence for Termination? 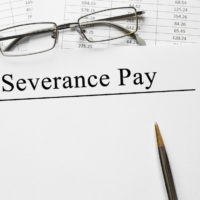 Having litigated employment discrimination cases for almost twenty years, our Alachua County, Florida employment discrimination attorneys have learned that employers frequently deny that they fired an employee. Instead of admitting that an employee was fired, employers will claim that the employee quit. In some circumstances, employers even try to create the false impression that an employee was not fired by sending the employee a post-termination letter stating that the employee has not been fired and is welcome to return to work. Read on to learn more about different evidence of termination such as the use of a severance agreement.

Employers deny an employee was fired and engage in such deceptive tactics because whether an employee was fired or quit can significantly the outcome of many employment discrimination cases. For example, in the context of supervisor hostile work environment sexual harassment, an employer is strictly liable for the supervisor’s harassment if the harassment culminates in the victim’s termination. However, when the supervisor’s harassment does not culminate in the victim’s termination, the employer can avoid liability for the harassment if it establishes an affirmative defense. To establish the affirmative defense, an employer must show that it exercised reasonable care to prevent and promptly correct any sexually harassing behavior, and that the victim unreasonably failed to take advantage or any preventive or corrective opportunities provided by the employer. Because the legal standards for proving termination and resignation cases are significantly different in the employment discrimination context, employers often manipulate the circumstances surrounding an employee’s separation in order to wedge the case into a resignation case and thereby reduce their risk of liability.

The decision by the U.S. Fourth Circuit Court of Appeals in Dulaney v. Packaging Corp. of America, 673 F.3d 323 (4th Cir. 2012) is instructive in showing that employer’s offer of a severance agreement can be used as evidence to establish that an employee was fired and prevent an employer from utilizing a more favorable legal standard in order to immunize itself from liability. In that case, Carla Dulaney (Dulaney) brought a sexual harassment claim against her former employer, Packaging Corporation of America (PCA), pursuant to Title VII of the Civil Rights Act of 1964 (Title VII).

Dulaney worked as an hourly employee at PCA’s plant in Roanoke, Virginia. Shortly after her employment began, a man named Mills, who was a supervisor of Dulaney, approached Dulaney about “taking care of him” by performing sexual favors. Dulaney initially refused, at which point, she claimed that Mills followed through on threats to make her life “hell” by screaming at her, spreading rumors, and otherwise interfering with her work if she continued to refuse. Dulaney eventually acceded to Mills’ sexual demands. At some point, Mills also began making sexually explicit comments about Dulaney to her co-workers. For example, he spread a rumor that Dulaney had a sexually transmitted disease. Dulaney alleged that this and other rumors caused other employees to treat her poorly.

Dulaney complained about Mills’ derogatory remarks to a supervisor named Bourne. Bourne responded to Dulaney’s complaint by reminding her that she was “replaceable.” A few days later, Dulaney complained to an employee in PCA’s human resources department named Bright. Bright proposed a severance agreement and arranged for one to be prepared for Dulaney to review. An internal PCA memorandum about Dulaney stated that “when the separation agreement is prepared . . . payroll automatically stops the employee’s pay as of the termination date stated in the agreement . . . Payroll coding is as follows: employment status is terminated . . . termination reason should be completed as quit with notice.” The severance agreement stated that Dulaney’s employment with PCA shall be terminated effective November 2.

Dulaney testified that at a meeting with Bright on November 5, Bright told her that she was required to sign the severance agreement before she left the office that day or she would be fired. When she refused to sign, a PCA supervisor escorted her out of the office and told her to take her belongings. The supervisor then took Dulaney’s key to the plant and asked her when she would be able to return her uniform. Dulaney returned her uniform on November 7. That same day, Bright wrote Dulaney a letter stating that she still had not been fired and was welcome to return to work. In Dulaney’s unemployment hearing on November 29, PCA described her status as “terminated”.

In reversing the trial court’s decision, the Fourth Circuit explained that PCA’s letter to Dulaney “does not stand in isolation.” Under the totality of the circumstances, the appellate court reasoned, a jury could find that “Dulaney had been terminated regardless of whether or not she signed the [severance] agreement.” In support of this finding, the court of appeals pointed to evidence showing that Dulaney was informed that she would be fired if she did not sign the agreement, escorted off the premises after she refused to sign the agreement, and removed the payroll three days before she first saw the agreement. Consequently, the Fourth Circuit found that by offering Dulaney a severance agreement and instructing Dulaney to sign the severance agreement or she would be fired, PCA, in effect, admitted that it fired Dulaney despite PCA’s post-discharge letter to Dulaney and subsequent position in litigation that Dulaney had not been fired.

Having determined that Dulaney produced sufficient evidence to establish that PCA fired her, the Fourth Circuit also pointed out that the record contained evidence establishing that the supervisor sexual harassment culminated in the taking of a tangible employment action against Dulaney in the form of termination. Whether there was a “nexus” or causal connection between Mills’ sexual harassment and Dulaney’s termination, the appellate court concluded, was an issue for the jury to resolve. If the jury found such a “nexus” or causal connection, the court of appeals explained, then PCA was strictly liable for the hostile work environment harassment that Dulaney endured.

In reversing the trial court’s factual finding that Dulaney was not fired, the Fourth Circuit also reversed the trial court’s legal conclusion that PCA was not liable for the supervisor sexual harassment because the legal standard governing PCA’s liability for the harassment changed dramatically in favor of Dulaney based on the Fourth Circuit’s finding that Dulaney had produced sufficient evidence showing that she was fired. Indeed, because there was evidence that Mills’ sexual harassment culminated in Dulaney’s termination, PCA could not avoid liability for the supervisor harassment by establishing an affirmative defense. Rather, PCA could assert an affirmative defense to liability only if the jury found there as no “nexus” or causal connection between Mills’ sexual harassment and Dulaney’s termination.