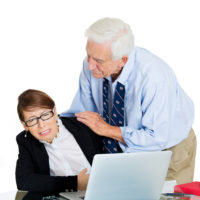 Under Title VII of the Civil Rights Act (Title VII), employees are protected from sexual harassing behavior which is sufficiently severe or pervasive to discriminatorily alter the conditions of the victim’s employment and create a hostile work environment. In determining whether the harassment was sufficiently severe or pervasive to create an abusive working environment, courts, as observed by the U.S. Seventh Circuit Court of Appeals in Smith v. Shehan, 189 F.3d 529 (7th Cir. 1999), “must examine all of the circumstances, including the frequency of the discriminatory conduct; its severity; whether it is physically threatening or humiliating, or a mere offensive utterance; and whether it unreasonably interferes with an employee’s work performance.”

In that case, Susan Williams (Williams) brought a sexual harassment claim against her employer, the Silver Springs Volunteer Fire Department (Fire Department), pursuant to Title VII. Williams was a volunteer member of the Fire Department and performed services as an Emergency Medical Technician. During her employment with the Fire Department, Williams alleged that she was sexually harassed by her supervisor, an employee named Thompson. Thompson’s alleged sexually harassing towards Williams included sexually suggestive comments, touching her buttocks, rubbing his legs against her, and stalker-like behavior in the workplace. On one occasion, according to Williams, Thompson walked over to where Williams was seated, straddled her waist, and ground his pelvis into her.

The Fire Department filed a motion with the trial court seeking dismissal of Williams’ sexual harassment claim. In its motion, the Fire Department argued that Williams’ sexual harassment must be dismissed because Thompson’s alleged sexual behavior was not sufficiently severe or pervasive to create a hostile work environment. The trial court denied the Fire Department’s motion and ruled that it was for a jury to decide whether Williams endured sexually harassing behavior that was sufficiently severe or pervasive as to create a hostile work environment.