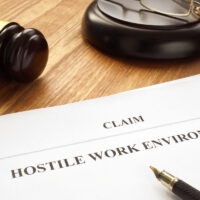 Under Title VII, racial harassment is a form of prohibited race discrimination. Racial harassment which is sufficiently severe or pervasive to alter the conditions of the victim’s employment and create a racial hostile work environment violates Title VII. The recent decision by the U.S. District Court for the Eastern District of New York in Watson v. Richmond University Medical Center, Case No. 14-cv-1033 (E.D. N.Y. Oct. 10, 2019) illustrates that discriminatory work assignments can create a racial hostile work environment in violation of Title VII.

In that case, Michelle Watson (Watson) brought a racial discrimination case against her former employer, Richmond University Medical Center (Richmond), pursuant to Title VII. Watson, who is African-American, alleges that Richmond violated Title VII by requiring her to work in a racial hostile work environment.

Richmond is a health care facility and teaching institute that provides medical and surgical care. Watson, who is a doctor, was hired by Richmond to work as a research fellow from July 1, 2010 through June 30, 2012. Watson was part of a fellowship program that trains physicians in clinical research.

Throughout her employment, according to Watson, she was subjected to discriminatory intimidation, ridicule, and insult on the basis of her race. The racially harassing behavior included removing petri dishes containing her research, locking her out of the laboratory where she worked, requiring her to teach students at a local high school, refusing to provide her with a letter of recommendation, and referring to her as Michelle instead of Dr. Watson. Watson further claims that her supervisor subjected her to racial harassment by requiring her to perform menial tasks, such as taking out the garbage, cleaning off her supervisor’s desk, filing her supervisor’s mail, rearranging bookshelves, and cleaning out the refrigerator.

Richmond filed a motion with the trial court seeking dismissal of Watson’s race discrimination claim. In doing so, Richmond argued that the alleged racially harassing behavior was not sufficiently severe or pervasive to create a hostile work environment in violation of Title VII. According to Richmond, although the alleged behavior may have been rude and insulting, the conduct was nothing more than trivial workplace grievances. The trial court denied Richmond’s motion for dismissal and ruled that Watson had presented sufficient evidence of a racial hostile work environment to take her case to the jury.

In denying Richmond’s motion for dismissal, the trial court focused on Watson’s allegations that she was required by her supervisor to perform menial tasks and referred to as Michelle instead of Dr. Watson. The trial court found that “being made to perform janitorial services and denied recognition for an earned medical degree could be deemed constantly humiliating.” Thus, the trial court concluded that the question of whether Watson worked in a racial hostile work environment was an issue of fact for the jury to resolve.

Based in Ocala, Florida and representing employees throughout Central Florida, our Citrus County, Florida race discrimination attorneys have almost twenty years of experience representing employees required to work in a racially-charged environment. If you have experienced racial discrimination at work or have questions about your protection against racial harassment in the workplace, please contact our office for a free consultation with our Citrus, Florida race discrimination lawyers. Our employment and labor law attorneys take race discrimination cases on a contingency fee basis. This means that there are no attorney’s fees incurred unless there is a recovery and our attorney’s fees come solely from the monetary award that you recover.