Can False Rumors That A Woman Slept With Her Boss To Get Promoted Create A Hostile Work Environment? 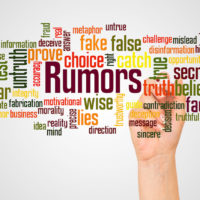 Under Title VII of the Civil Rights Act of 1964 (Title VII), employees are protected from workplace harassment that occurs because of the employee’s gender. Having fought for the rights of sexual harassment victims for nearly twenty years, our Marion County, Florida sexual harassment lawyers have learned that employers often claim that abusive behavior a woman endured in the workplace was not a form of sexual harassment because it was not based on her gender. Rather, employers maintain that the same abusive behavior could have been leveled against a man and, thus, did not occur because the employee is a woman.

This type of employer argument is customarily advanced in cases where a woman was the target of false rumors that she had sex with a male superior in order to obtain a promotion. Employers contend that such rumors do not constitute sexual harassment because they are not based on gender. Instead, employers claim, the rumors are based on false allegations of conduct by the victim. The decision by the U.S. Fourth Circuit Court of Appeals in Parker v. Reema Consulting Services, Inc., No. 18-1208 (4th Cir. Feb. 8, 2019) demonstrates that false rumors that a woman “slept her way to the top” can constitute a form of sexual harassment and create a hostile work environment.

In that case, Evangeline Parker (Parker) brought a sexual harassment lawsuit against her former employer, Reema Consulting Services, Inc. (RCSI), pursuant to Title VII. Parker claimed that she was subjected to hostile work environment sexual harassment based on false rumors that she slept with her male boss in order to obtain a promotion.

From December 2014 until May 2016, Parker worked for RCSI at its warehouse facility in Virginia. While she began as a low-level clerk, she was promoted six times ultimately rising to Assistant Operations Manager of the facility in March 2016. About two weeks after Parker assumed the position, she learned that “certain male employees were circulating within RCSI” an “unfounded, sexually explicit rumor about her” that “falsely and maliciously portrayed her as having had a sexual relationship” with a higher-ranking manager, Pickett, in order to obtain her management position. The rumor originated with a RCSI employee named Jennings, who began work at RCSI at the same time as Parker and in the same position. Because of her promotions, however, Parker soon became Jennings’ supervisor.

The highest-ranking manager at the warehouse facility, Moppins, participated in spreading the rumor. As the rumor spread, Parker “was treated with open resentment and disrespect” from many co-workers, including employees she was responsible for supervising. Consequently, Parker’s “work environment became increasingly hostile.”

Manager Will No Longer Recommend Her For Promotion

In late April 2016, Moppins called a mandatory all-staff meeting. When Parker and Pickett arrived a few minutes late, Moppins let Picket enter the room but “slammed the door in Parker’s face and locked her out.” Parker learned the next day that the false rumor was discussed at the meeting. At that meeting, Moppins blamed Parker for “bringing the situation to the workplace.” He said that he had “great things” planned for Parker at RCSI, but that he “could no longer recommend her for promotions or higher-level tasks because of the rumor.”

Several days later, Parker and Moppins met again to discuss the rumor. Moppins again blamed Parker and said that he should have fired her when she began “huffing and puffing” about the rumor. Later that same day, Parker filed a sexual harassment complaint against Moppins and Jennings with RCSI’s Human Resources Manager. On May 18, 2016, Parker was called into a meeting with Moppins, the Human Resources Manager, and RCSI’s in-house counsel. At that meeting, Moppins simultaneously issued Parker two written warnings and then fired her.

In reversing the trial court, the Fourth Circuit grounded its decision in the gender stereotyping theory of sex discrimination. The appellate court pointed out that the rumor that Parker had sex with her male superior in order to obtain a promotion “implied that Parker used her womanhood, rather than her merit, to obtain from a man, so seduced, a promotion.” This implication, the court of appeals observed, “invokes a deeply rooted perception—one that unfortunately still persists—that generally women, not men, use sex to achieve success.” “And with this double standard, women, but not men, are susceptible to being labeled as ‘sluts’ or worse prostitutes selling their bodies for gain.”

Because the “traditional negative stereotypes regarding the relationship between the advancement of women in the workplace” may “cause superiors and co-workers to treat women in the workplace differently from men,” the Fourth Circuit found that Parker “plausibly alleged that [she] suffered harassment because she is a woman.” In other words, the appellate court reasoned, if Parker had been a man, then she would not have been subjected to false rumors that she slept her way to the top. Thus, the harassment occurred because of Parker’s gender as the same rumors would not have been leveled against a man due to “deeply rooted perception” that “women, not men, use sex to achieve success.” Because the harassment occurred because of Parker’s gender, the Fourth Circuit concluded, the harassment was a form of sexual harassment prohibited by Title VII.