Can Homophobic Slurs In The Workplace Create A Hostile Work Environment? 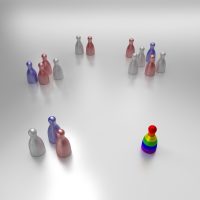 For the past two decades, our Marion County, Florida LGBTQ rights attorneys have fought for the rights of workers who have been required to work in a hostile environment. Based on their decades of experience representing hostile work environment harassment victims, our Ocala, Florida LGBTQ rights lawyers know that LGBTQ employees are often targeted for homophobic slurs in the workplace. In this article, our Marion County, Florida LGBTQ rights lawyers explain how the recent decision in Hawkins v. City of Philadelphia, Case No. 19-5288 (E.D. Penn. Nov. 30, 2021) demonstrates that LGBTQ employees who are the target of homophobic slurs can establish they work in a hostile environment in violation of federal employment discrimination law.

In Hawkins a man named Hawkins brought an employment discrimination lawsuit against his employer, City of Philadelphia (the City), pursuant to Title VII. Hawkins claims that he was subjected to hostile work environment harassment because of his sexual orientation in violation of Title VII.

Hawkins, who is openly gay, began working for the City in the Police Department’s Office of Forensic Science’s Criminalistics Unit (the Department) in 2008. In March 2012, Hawkins informed the forensic laboratory manager that his co-workers were harassing him because of his sexual orientation. He described the incidents as dating back to 2009. As an example of the sexual orientation harassment, Hawkins alleged that three of his co-workers would bang on and throw a tennis ball against his cubicle wall while yelling his name in an effeminate manner.

In December 2012, Hawkins brought another complaint to management alleging this a co-worker posted photographs in the workplace that were intended to harass him about his sexual orientation. Hawkins alleged that a poster of American Idol contestant Sanjaya Malakar was displayed over the co-worker’s desk. Hawkins contends that the depiction was meant to “mock and embarrass” him, as “Sanjaya is an offensive term used to refer to an effeminate, weak, and cowardly man.” Hawkins further alleges that the co-worker who displayed the poster made references to “Sanjaya” while using an effeminate tone and contends that the co-worker’s use of the term “Sanjaya” was a code name for gay. That co-worker placed on Hawkins’ desk a picture of the co-worker hugging another man.

Hawkins further contends that he regularly heard co-workers say homophobic slurs and phrases such as “faggot” and “no homo” in voices loud enough for Hawkins to hear while he was at his desk or walking through the office. In January 2015, Hawkins claims that he overheard a co-worker say, “only faggots wear skinny jeans.” That same month, Hawkins alleges that he heard the slur “faggot” from the other side of a wall but does not know who said it. In March 2015, Hawkins asserts that he heard a co-worker whisper the same slur when Hawkins walked into an administrative room to retrieve a document from a printer.

In 2018, Hawkins reported to the laboratory manager that his direct supervisor created a hostile work environment by singling him out in meetings. Hawkins claims that in 2019 he heard his supervisor say “faggot” loudly enough for him to hear before the supervisor entered his workspace. Also in 2019, as Hawkins walked through an area where a meeting was happening, Hawkins heard his supervisor say, “It’s National Slap Your Irritating Co-Worker Day.” Hawkins experiences Post Traumatic Stress Disorder. He has received treatment for the disorder since 2010 and believes it has been caused by the allegedly hostile working environment harassment he endured.

The City filed a motion with the trial court seeking dismissal of Hawkins’ hostile work environment harassment claim. In doing so, the City argued that the alleged acts of harassment were not sufficiently severe or pervasive to alter the conditions of Hawkins’ employment and create a hostile working environment in violation of Title VII. The trial court denied the City’s motion for dismissal and ruled that Hawkins had presented sufficient evidence to establish that he was subjected to unlawful harassment because of his sexual orientation to proceed to a jury trial.

In denying the City’s motion for dismissal, the trial court focused on Hawkins’ allegations that “his co-worker and supervisor used the term ‘faggot’ when referring to [Hawkins] on at least two occasions.” In March 2015, the trial court noted, Hawkins claims that he heard a co-worker use the slur when Hawkins walked into an administrative area. Hawkins further claims, the trial court pointed out, that his supervisor used the homophobic slur in 2019 when walking into Hawkins’ workspace. Although Hawkins maintains that he heard the homophobic slur “faggot” on at least two other occasions, the trial court determined that the incidents were not part of Hawkins’ hostile working environment because Hawkins “does not point to any evidence that these comments were directed at [him].”

One of the most crucial decisions LGBTQ employees must make is which employment law firm to contact for legal advice regarding their legal rights. As part of our commitment to vindicating the rights of employment discrimination victims, an experienced employment law attorney will speak with you personally and you will receive the individualized attention your case deserves. We offer free confidential case evaluations for employees, and you will not have to pay to speak with our employment law attorneys regarding your rights under federal employment discrimination law. We are available for consultation at your convenience, including scheduling telephone consultations for evenings and weekends.