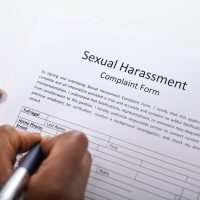 Sexual harassment is a form of sex or gender discrimination prohibited by Title VII of the Civil Rights Act of 1964 (Title VII). Because sexual harassment is a form of sex or gender discrimination, an employee must show that she was harassed based on her sex or gender to prevail on a claim of hostile work environment harassment. To violate Title VII’s prohibition against sexual harassment, as observed by the U.S. Second Circuit Court of Appeals in Raniola v. Bratton, 243 F.3d 610 (2d Cir. 2001), “the harassing conduct need not be motived by sexual desire,” so long as it was motived by the victim’s sex or gender. Consequently, acts of overt gender-based hostility, whether verbal or physical, directed at women can create a hostile work environment in violation of Title VII.

Castagna began working for LMK as a comptroller, and after four or five months became the front desk receptionist. Castagna claims that “almost from the beginning of her employment and continuing throughout the remainder of her employment,” LMK’s owner subjected her and other female employees to a pattern of discriminatory abusive behavior because of their gender. The owner’s alleged gender-based abusive behavior towards Castagna include screaming at her, swearing at her, calling her stupid, monitoring her coffee and bathroom breaks, and instructing her not to leave her desk. Castagna maintains that the owner also abused other female employees by yelling at them, swearing at them, and hurling sexual epithets at them. Castagna further alleges that the owner made gender-based discriminatory comments, such as remarking there is “nothing worse than a female.” Castagna contends that the owner’s abusive behavior towards her and other female employees was motivated by his animosity towards women.

On her last day of work, the owner asked Castagna to shorten her lunch period that week. When Castagna asked him for “comp” time in return, the owner became upset. Fifteen minutes later, after “building up steam,” the owner went back to where Castagna sat, yelled at her and shoved her computer at her. Castagna feared for her safety and left. Later that day, she filed a police report regarding the incident. Castagna claims that the owner also had violent alterations with two other female employees. In the case of one female worker, the owner yelled at her for failing to forward an important call, put his finger in her face, and cursed her. In the case of the other female employee, the owner threw a coffee mug against a wall close to her.

The Second Circuit reversed the trial court’s dismissal and reinstated Castagna’s claim of gender-based hostile work environment harassment. In reversing the trial court, the appellate court focused on the owner’s physically threatening behavior towards female employees. The court of appeals pointed out that the owner “directed physical threats at three female employees, including Castagna, but he never physical threatened men.” Under long standing law, the court of appeals explained, “such evidence of physical threats is highly probative of the severity of the alleged hostile work environment.” The appellate court also noted that the “lack of any evidence that [the owner] physically threatened men—as opposed to women—supports a reasonable inference that [the owner] singled out women for physical threats because of their sex.” Thus, the Second Circuit concluded that a “reasonable jury could find that Castagna was subjected to a hostile work environment because of her sex.”

Based in Ocala, Florida and representing workers throughout Florida, our employment attorneys in Citrus County, Florida have litigated hostile work environment harassment cases in Florida courts for more than twenty years. If you been subjected to physically threatening behavior in the workplace or have questions about your rights as a hostile work environment harassment victim, please contact our office for a free consultation with our employment lawyers in Citrus County, Florida. Our employee rights law firm takes employment discrimination cases on a contingency fee basis. This means that there are no attorney’s fees incurred unless there is a recovery and our attorney’s fees come solely from the monetary award that you recover.