Can Pregnant Employees Be Forced To Take Unpaid Leave When They Can Do The Job? 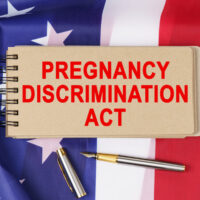 Pregnant Employees Must Be Allowed To Work

The Pregnancy Discrimination Act (PDA) prohibits employers from discriminating against employees on the basis of pregnancy, childbirth, or related medical conditions. Under the PDA, as the U.S. Supreme Court determined in Automobile Workers v. Johnson Controls, 499 U.S. 187 (1991), “[p]regnant women who are able to work must be permitted to work on the same conditions as other employees.” Thus, the Johnson Controls Court explained, the PDA prohibits employers from “forc[ing] women who are able to work to stop working regardless of their ability to continue.” Rather, as the Johnson Controls Court observed, “the decision . . . to work while being [ ] pregnant . . . [is] reserved for each individual woman to make herself.”

In Tolefree, a female worker named Tolefree brought a pregnancy discrimination lawsuit against her former employer, Swift Transportation Company, Inc. (Swift). Tolefree claims that Swift discriminated against her on the basis of pregnancy by placing her on an involuntary unpaid leave of absence, despite the fact that she was capable of doing her job.

Tolefree worked for Swift as a truck driver. Tolefree claims that her job “required very little physical activity,” and she was “never required to push, pull, carry, or lift anything.” When she was about three months pregnant, Tolefree gave Swift a note from her doctor confirming her pregnancy and estimating when she would deliver. She continued to work without problems for about two more weeks, then sent in another doctor’s note that imposed a restriction of no lifting or pulling more than 20 pounds.

A few minutes after she gave her supervisor the second note, Tolefree got a call from a manager who told her to turn her keys in immediately and not work again until she was “one hundred percent.” The manager did not ask whether she could continue working safely and discussed no accommodations that might permit her to keep working. Tolefree understood this to mean that she could not drive while she was pregnant—no exceptions. She asked another supervisor if this was correct; she was told it was.

For the next week, Tolefree tried unsuccessfully to contact Swift’s human resources department. She eventually reached someone and explained that she could and wanted to continue driving while she was pregnant. Swift’s records show, however, that it placed Tolefree on “medical hold” the same day it received the second’s doctor’s note. As a result, Tolefree could not drive and would receive no pay. Ultimately, Swift informed Tolefree that she would be on unpaid leave until six weeks after her due date. Swift would not reassign her or create light duty assignments. Due to being placed on an involuntary leave of absence without pay, Tolefree applied for open positions with Swift, but received no response. Because of her intolerable working conditions, Tolefree felt that she had no choice but to quit.

Swift filed a motion with the trial court seeking dismissal of Tolefree’s pregnancy discrimination claim. Swift argued that Tolefree was not placed on a months-long unpaid leave of absence because of her pregnancy but because Tolefree could not do her job. In denying Swift’s motion for dismissal, the trial court noted that the crux’s of Tolefree’s pregnancy discrimination claim was that Swift placed her on an involuntary unpaid leave of absence even though “she was still capable of performing the tasks required of her position as a truck driver with only minor accommodations if any.”

Under pregnancy discrimination law, the trial court explained, Swift could not force Tolefree to stop working regardless of her ability to continue by placing her on a months-long unpaid leave of absence. In placing Tolefree on an involuntary unpaid leave of absence based on a doctor’s note with a 20-pound lifting and pulling restriction even though Tolefree maintained that “her job did not actually require heavy lifting, pulling, or exertion,” the trial court found that the evidence “suggests that her pregnancy was the reason for [Swift’s] decision, not her ability to do the job.” Because she had produced evidence that Swift forced her to stop working despite her ability to continue working as a truck driver, the trial court concluded, Tolefree was entitled to proceed to a jury trial on the issue of whether Swift unlawfully discriminated against her on the basis of pregnancy.