Can Pregnant Employees Be Transferred Because Of Safety Concerns For The Unborn Child? 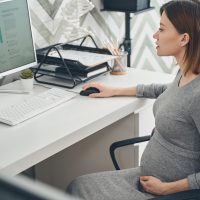 The Pregnancy Discrimination Act (PDA) of 1978 prohibits employers from discriminating against women because of pregnancy, childbirth, or related medical conditions. In construing the protection guaranteed to pregnant employees by the PDA, the U.S. Supreme Court in UAW v. Johnson Controls, 499 U.S. 187 (1991) explained that “employment late in pregnancy often imposes risks on the unborn child, but Congress indicated that the employer may take into account only the women’s ability to get her job done.” The Johnson Controls Court further explained that “decisions about the welfare of future children must be left to the parents who conceive, bear, support, and raise them rather than to the employers who hire those parents.” Under Supreme Court precedent therefore, the decision to continue working in the face of risks to the unborn child is for pregnant employees to make—not their employers.

In Everts a woman named Everts brought a pregnancy discrimination lawsuit against her former employer, Sushi Brokers, LLC (Sushi Brokers), pursuant to the PDA. Evert claimed that she was fired because of her pregnancy in violation of the PDA after she refused to accept reassignment to a different position because of safety concerns for her unborn child.

Everts worked as a server at Sushi Brokers’ restaurant. During her employment, Everts became pregnant. Sushi Brokers maintained a standard, unwritten policy at the restaurant of reassigning pregnant servers to a hostess position. The owner of Sushi Brokers admitted during the litigation that “we don’t believe because servers are pregnant that they should be fired. They all go to the hostess stand.” The owner further admitted that reassignment had been a standard practice at the restaurant for fifteen years and that another pregnant employee had been reassigned to a hostess position during the pending litigation.

Upon learning of Everts’ pregnancy, Sushi Brokers tried to reassign her to a hostess position out of fear for the safety of her unborn child. During his deposition, the owner explained that “I wasn’t worried about her. I was worried about her kid getting hurt.” Another manager at the restaurant testified that Sushi Brokers tried to reassign Everts because the server position, which required Everts to carry heavy plates, knives, and forks, could “potentially be harmful to her and the child she was carrying.” When Everts refused to accept transfer to a hostess position, Sushi Brokers terminated her employment.

Safety Concerns Do Not Justify Discrimination

In finding that Everts had established her rights under the PDA were violated, the trial court rejected Sushi Brokers’ argument that it was legally entitled to reassign Everts to a hostess position based on concerns about safety of her unborn child. The trial court pointed out that Sushi Brokers’ justification for reassignment of Evert—concerns about the safety of her unborn child—was “explicitly rejected” by the Supreme Court in Johnson Controls  The trial court also observed that Sushi Brokers’ “statements about the weights of plates, sharp knives, and other conditions in the restaurant that [Sushi Brokers] sees as inappropriate for a pregnant server are arbitrary stereotypes about the physical capabilities of pregnant women” and an impermissible justification under the PDA for an employment decision.