Can Racial Segregation In The Workplace Contribute To A Racial Hostile Work Environment? 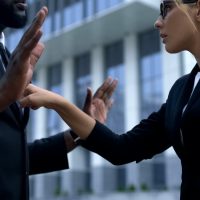 In that case, an African-American man named Perkins brought a racial harassment claim against his former employer, Detroit Salt Company (Detroit Salt) pursuant to Title VII of the Civil Rights Act of 1964 (Title VII). Title VII prohibits employers from discriminating against employees on the basis of race. In interpreting Title VII, courts have consistently ruled that racial harassment is a form of racial discrimination forbidden by Title VII. To violate Title VII, racial harassment must be sufficiently severe or pervasive to alter the conditions of the victim’s employment and create a hostile working environment. Perkins claims that Detroit Salt violated Title VII by creating and maintaining a racial hostile working environment.

Detroit Salt owns and operates a salt mine. Perkins began working for Detroit Salt in September 2017. Perkins worked in the bagging plant and was responsible for shipping bags of salt. Two white employees, Lustila and Loeffler, were responsible for packaging the salt into bags that Perkins would then ship. According to Perkins, Loeffler and Lustila made discriminatory remarks about African-Americans. Perkins maintains that Loeffler used racial slurs when referring to African-American employees and Lustila told another white employee that “us white guys have to pick up the slack for the black guys.” Perkins also claims that he observed a swastika drawn on a vehicle in the mines.

Perkins reported the racially abusive behavior to his supervisor, a man named Shook. Shook characterized Lustila as a “bigot and racist.” Shook investigated Perkins’ reports but never logged them or notified human resources or other management about them. Ultimately, Perkins made a racial discrimination complaint to human resources. Following Perkins’ complaint, Detroit Salt launched a full-fledged investigation that resulted in Loeffler’s termination and reprimands for Shook and Lustila.

Detroit Salt filed a motion with the trial court seeking dismissal of Perkins’ racial harassment claim. In doing so, Detroit Salt argued that any race-based harassment in the workplace was not sufficiently severe or pervasive to create a racial hostile working environment in violation of Title VII. The trial court denied Detroit Salt’s motion for dismissal and ruled that Perkins had produced sufficient evidence that he worked in racial hostile work environment to proceed to a jury trial.

In denying Detroit Salt’s motion for dismissal, the trial court focused on the findings of the internal investigation regarding racial segregation in the workplace. The trial court noted that although most of the employees who worked in the plant were African-American, the internal investigation report concluded that “workers appeared to be segregated by race” and there was “a perception” of racially segregated bathrooms. The trial court also pointed out that the internal investigation report concluded that there was “rampant use of inappropriate comments and conduct in the workplace that could be perceived as racially-tinged.” Based on the totality of the racially abusive behavior in the workplace, the trial court concluded, a reasonable jury could find that the “racist conduct was severe or pervasive enough to alter Perkins’ working conditions” and create a racially hostile work environment in violation of Title VII.