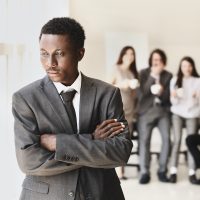 In Wilkins, a man named Wilkins brought a racial harassment claim against his employer, United Parcel Service, Inc. (UPS), pursuant to Title VII. Wilkins, who is African-American, claims that UPS violated Title VII by creating and maintaining a racially hostile work environment. More specifically, Wilkins claims that he was repeatedly subjected to disciplinary action because of his race which created a racially hostile work environment in violation of Title VII.

In 1998, Wilkins began working as a delivery driver for UPS. Wilkins worked out of UPS’s facility in New York. In September 2015 until May 2017, Wilkins was supervised by the business manager of the facility, a white man named Valent. Wilkins claims that Valent subjected him to a “flurry” of formal and informal disciplinary actions allegedly on the basis of his race. Over the course of the almost twenty months that Valent supervised Wilkins, Wilkins received at least sixteen notices of discharge or suspension, along with other types of informal discipline and scrutiny. Wilkins claims that the allegedly race-based disciplinary actions culminated in June 2016 when Valent allegedly fabricated a story of Wilkins threatening him with a knife.

During Valent’s tenure as business manager, Wilkins filed at least eight grievances through his union regarding the purportedly excessive discipline he was accruing. Six of the eight grievances referenced Valent by name and all of the grievances complained of some combination of “intimidation,” “harassment,” and “discrimination.”

In allowing Wilkins to bring his claim before a jury for resolution, the trial court observed that Wilkins’ claim lacks “any facially racist comments or other direct evidence of racism.” However, the trial court determined, Wilkins supplied “sufficient circumstantial evidence that Valent targeted [Wilkins] and other minority package drivers at UPS for discipline more frequently than he did similarly situated white drivers committing similar offenses.” The evidence of “a barrage of unfair discipline,” the trial court reasoned, was sufficient to establish that Wilkins was subjected to pervasive harassment because of his race.