Can Unlawful National Origin Harassment Occur When The Harasser & Victim Are From The Same Country? 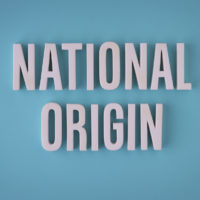 As with many employer arguments in the employment discrimination context, the contention by employers that they are immune from liability for workplace discrimination when the alleged discriminator and victim are of the same race or national origin is contrary to long standing law. As explained by the Supreme Court in Castaneda v. Partida, 430 U.S. 482 (1977), “[b]ecause of the many facets of human motivation, it would be unwise to presume as a matter of law that human beings of one definable group will not discriminate against other members of their group.” Thus, as observed by the U.S. Seventh Circuit Court of Appeals in Kadas v. MCI Systemhouse Corp., 255 F.3d 359 (7th Cir. 2001), court have “emphatic[ally]” rejected the idea that an individual is unlikely to discriminate against an employee of the same race or national origin.

Kang’s supervisor, Yoon, was also of Korean origin. Kang alleged that Yoon subjected him and other Korean workers to verbal and physical abuse based on their national origin. The verbal abuse consisted of Yoon screaming at Kang for up to three hours a day and calling him “stupid,” “cripple,” and “jerk.” The physical abuse consisted of striking Kang in the head with a metal ruler on approximately twenty occasions, kicking him in the shins, pulling his ears, throwing objects at him, and forcing him to do jumping jacks. When Kang began to cut back on the required overtime in order to spend time with his wife, Yoon fired him.

Kang claimed that Yoon discriminatorily abused him and other Korean workers because Yoon viewed their Korean national origin as superior. Yoon told Kang that he had to work harder because he is Korean. Yoon also told Kang that Mexicans and Americans, unlike Koreans, are not hard workers. Kang further claimed that Yoon did not subject Mexican workers to the same verbal and physical abuse. Consequently, Kang claimed that he and other Korean workers were subjected to verbal and physical abuse because they failed to conform to Yoon’s stereotypical notions that Koreans are superior.

Harassed Because of Stereotypical Notions Of Superiority

The Ninth Circuit found that Kang had shown that “Yoon abused him because of Yoon’s stereotypical notions that Korean workers were better than the rest and Kang’s failure to live up to Yoon’s expectations.” Although such a form of discrimination “is unusual,” the appellate court explained, Title VII nonetheless prohibits an employee from being harassed based on a failure to conform to stereotypical notions about how a member of a particular race or national origin is expected to behave. In support of its conclusion that Kang was harassed because Yoon viewed their Korean national origin as superior, the court of appeals pointed to Yoon’s remark that Kang had to work harder because he is Korean and Yoon’s remark that Mexicans and Americans, unlike Koreans, are not hard workers. Because Kang had produced sufficient evidence to establish that he was harassed based on his national origin, the Ninth Circuit concluded, Kang was entitled to bring his national origin hostile work environment harassment claim before a jury.