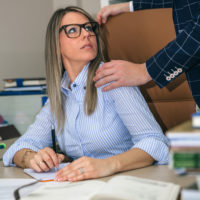 As explained by the U.S. Second Circuit Court of Appeals in Petrosino v. Bell Atlantic, 385 F.3d 210 (2d Cir. 2004), employers are not “automatically liable” for sexual harassment by employees. Rather, in the context of harassment by non-supervisory employees, an employer’s liability requires a showing that the employer knew or should have known about the harassment but failed to take prompt and effective remedial action to prevent the harassment from recurring. As observed by the U.S. Ninth Circuit Court of Appeals in Nichols v. Azteca Restaurant Enterprises, Inc., 256 F.3d 864, 875 (9th Cir. 2001), “[w]hen an employer undertakes no remedy, or where the remedy does not end the current harassment and deter future harassment, liability attaches for both the past harassment and any future harassment.” The decision by the U.S. District Court for Connecticut in DelSasso v. 1249 Wine Bar, 2017 WL 1234110 (D. Conn. March 31, 2017) illustrates that an employer can be held liable for sexual harassment when the harassment continues after a complaint by the victim to management.

In that case, Claudia DelSasso (DelSasso) brought claims for sexual harassment and retaliation pursuant to Title VII of the Civil Rights Act of 1964 (Title VII) against 1249 Wine Bar (Wine Bar). DelSasso worked as a server at Wine Bar. DelSasso alleged that she was sexually harassed employees who worked in the restaurant’s kitchen. The alleged sexual harassment included making kissing gestures at her, calling her “mommy,” grabbing her buttocks, brushing up against her, grabbing her waist, stroking the back of her neck, touching her legs and hips, making sexual propositions, playing an audio on a cell phone of a woman moaning, and showing her a photograph a harasser’s genitals. DelSasso testified that she complained on multiple occasions to management about the harassment, and was told that harassment would not be tolerated and the problem would be addressed immediately. About one week after she asked a management-level employee to place a document in her personal file setting forth her sexual complaints, DelSasso was terminated.

In denying Wine Bar’s motion for dismissal of DelSasso’s retaliation claim, the trial court concluded that a jury could find that Wine Bar’s reasons for DelSasso’s termination were a pretext for retaliation. The trial court pointed out that although Wine Bar alleged that DelSasso was fired because it needed to reduce the number of wait staff due to financial difficulties, Wine Bar hired 11 or 12 new employees in a five-month period following DelSasso’s discharge. The trial court also observed that although DelSasso was fired for allegedly serving two entrees without charging for them, another employee who was suspected in connection with the missing food and money remained employed by Wine Bar. The trial court also found that the evidence demonstrated a specific link between DelSasso’s complaints and termination because Wine Bar discharged her about one week after she provided Wine Bar with a letter documenting her sexual harassment complaints. Based on the totality of the circumstances, the trial court reasoned, it was for a jury to decide whether DelSasso’s termination was motivated by retaliatory intent.