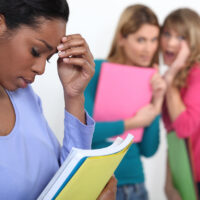 Having represented racial discrimination victims for more than two decades, our Gainesville, Florida race discrimination lawyers know that a common employment law myth is that an employee must be the specific target of incidents of racially harassing conduct in order to prove that he or she worked in a racial hostile work environment. However, as the U.S. Eleventh Circuit Court of Appeals in Reeves v. CH Robinson Worldwide, Inc., 594 F.3d 798 (11th Cir. 2010) observed, an employee can “prove a hostile work environment by showing severe or pervasive harassment discrimination directed against her [race], even if she was not individually singled out.” Thus, employees may establish that they worked in a racial hostile work environment by showing that racially offensive conduct occurred in their presence, even if the racially offensive conduct was not specifically directed at them.

The decision by the U.S. District Court for the District of Arizona in Lamptey v. Corrections Corp. of American, Case No. 13-02156 (D. Ariz. June 12, 2014) demonstrates that if an employee is required to work in a racially charged work environment, the employee can still prove a racial hostile work environment harassment claim, even if the employee was not the specific target of the racially offensive behavior. In that case, Maisha Lamptey (Lamptey) brought an employment discrimination lawsuit against her former employer, Corrections Corporation of America (CCA), pursuant to Title VII of the Civil Rights Act of 1964 (Title VII). Title VII prohibits employers from discriminating against employees on the basis of race. Racial harassment is a form of racial discrimination forbidden by Title VII. Lamptey claimed that CCA violated Title VII by requiring her to work in a racial hostile work environment.

Lamptey, who is African-American, worked for CCA at a prison in Arizona. Lamptey served as a correctional officer and was required to supervise inmates. In early 2012, according to Lamptey, CCA employees posted a magazine cutout of a gorilla in a supervisor’s office, made racial jokes about the picture, and compared the picture to Lamptey. Lamptey saw the picture herself. Another employee told Lamptey about the racial jokes and comparisons.

After Lamptey complained about the racially offensive conduct, CCA conducted an internal investigation. After a one-month investigation, CCA fired two supervisors. During the month-long investigation, and for two months after CCA fired the supervisors, several co-workers continued to make racially charged comments in Lamptey’s presence. Despite Lamptey’s repeated reports to human resources, CCA neither disciplined her co-workers nor provided any relevant training. Because of the racially charged comments, Lamptey attempted to avoid her co-workers. Ultimately, CCA transferred Lamptey to another prison.

In denying CCA’s motion for dismissal, the trial court determined that Lamptey’s allegations that co-workers made racially charged comments in her presence for several months after a supervisor was fired, in part, for displaying a gorilla picture in his office were sufficient to establish that she worked in a racially abusive work environment. The trial court explained that although the co-workers did not direct their racially charged comments at Lamptey, “if racial hostility pervades a workplace,” an employee “may establish a violation of Title VII, even if such hostility was not directly targeted at the [employee].”

Based in Ocala, Florida and representing employees throughout Central Florida, our Gainesville, Florida race discrimination attorneys have been fighting for the rights of employees forced to work in a racial hostile work environment for more than two decades. If you have worked in a racially abusive environment or have questions about an employer’s obligation to protect you from racial harassment in the workplace, please contact our office for a free consultation with our Gainesville, Florida race discrimination lawyers. Our employment and labor law attorneys take race discrimination cases on a contingency fee basis. This means that there are no attorney’s fees incurred unless there is a recovery and our attorney’s fees come solely from the monetary award that you recover.