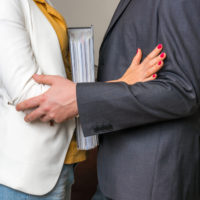 In that case, Nicole Prager (Prager) claimed that she was compelled to resign her employment with Joyce Honda, Inc. (Joyce Honda) because of retaliation she endured after complaining about sexual harassment from a customer. Prager, who was twenty years old, worked as a receptionist at Joyce Honda. During her employment, a customer of the dealership leaned over the counter while Prager was on the phone and tugged at the sleeve of her off-the-shoulder shirt, exposing her bra.

Prager testified that her work environment changed after she complained about the customer. Prager felt that she was isolated at work and other employees refused to talk to her. About one week after she complained about the customer, Prager was subjected to two written warnings for leaving work early without permission. After the written warnings were issued, Prager attended another meeting with management. During this meeting, Prager told the managers that the written warnings were retaliation against her for complaining about the customer. Prager said that her “anxiety was high enough that [she] was throwing up before work.” In response, the General Manager told Prager that if “the job makes her feel physically ill, it would be in her best interest most likely to resign.” Shortly after the meeting, Prager resigned her employment.

Although Prager’s retaliation claim was brought under New Jersey state law, the appellate court looked to federal case law interpreting Title VII in rejecting the trial court’s conclusion and finding that Prager was protected from retaliation when she complained to the police about sexual harassment from the customer. In finding that the trial court erred as a matter of law, the appellate court specifically found that Prager’s “report to the police of an offensive touching in her workplace by a customer of her employer clearly constitutes protected activity” for purposes of New Jersey retaliation law and Title VII.