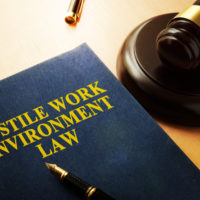 In order to state a claim for racial harassment, an employee must establish that he or she was subjected to racially harassing behavior that was sufficiently severe or pervasive to alter the terms or conditions of employment and create a hostile work environment. Because racial harassment does not have to both severe and pervasive to violate Title VII or § 1981, courts have acknowledged that a single incident of racial harassment, if sufficiently extreme, can create a racial hostile work environment. As explained by the U.S. Seventh Circuit Court of Appeals in Rodgers v. Western-Southern Life Ins. Co., 12 F.3d 66 (7th Cir. 1993), “[p]erhaps no single act can more quickly alter the conditions of employment and create an abusive working environment . . . than the use of an unambiguously racial epithet by a supervisor in the presence of his subordinates.” Echoing the reasoning in Rodgers, the decision by the U.S. Third Circuit Court of Appeals in Castleberry v. STI Group, 2017 WL 2990160 (3d Cir. July 14, 2017) demonstrates that a supervisor’s single use of a racial slur in front of African-American employees can create a racial hostile work environment.

Supervisor’s Use Of A Racial Slur Is Severe Harassment

In applying these principles, the Third Circuit found that the supervisor’s single use of a racial slur, coupled with the threat of termination, constituted “severe conduct that could create a hostile work environment.” The Third Circuit further explained that because Castleberry and Brown also alleged that on several occasions their sign-in sheets contained racially discriminatory comments and they were required to do menial tasks while their white co-employees were allowed to perform more complex work, their allegations “could satisfy the ‘pervasive’ standard for establishing a racial hostile work environment.” Thus, the Third Circuit concluded, Castleberry and Brown had alleged sufficient facts to establish a plausible claim of a racial hostile work environment under a theory that the racial harassment was either “severe” or “pervasive.”

The Third Circuit also rejected the trial court’s conclusion that Castleberry’s and Brown’s retaliation claim failed as a matter of law because they could not reasonably believe that a supervisor’s use of a racial slur on a single occasion amounted to unlawful discrimination. In doing so, the Third Circuit explained that because a supervisor’s single use of a racial slur can be sufficiently severe to create a racial hostile work environment, a single incident of racial harassment “can amount to unlawful activity” sufficient to support a retaliation claim.