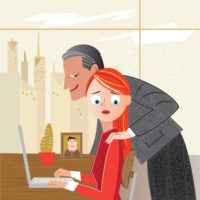 In that case, Frances Mendez Vazquez (Vazquez) brought a sexual harassment and retaliation lawsuit under Title VII against One Inc., d/b/a The Wings Family Restaurant (Restaurant). Vazquez was employed by the Restaurant as a server. Vazquez claimed that she was sexually harassed during her employment by her supervisor. According to Vazquez, the supervisor’s sexually harassing behavior included sexual comments, remarks about her body, rubbing his penis against her, and touching her intimate body parts.

In rejecting the Restaurant’s argument that it did not have notice of the supervisor’s sexual harassment against Vazquez because she was required to “file” a complaint with the human resources director, the trial court explained that although the word “file” usually means a written document, “there is more than one reasonable way to interpret this clause.” The trial court determined that a “reasonable jury could find that [Vazquez] met her duty to ‘file’ a complaint by submitting verbal complaints.” The trial court also found that it was not unreasonable for Vazquez “to channel the bulk of her verbal complaints” through the Restaurant’s owner. This is so, the trial court pointed out, because “when a supervisor’s behavior is at issue, an employee need only make reasonable use of the reporting procedures provided by her employer[.]” Thus, the trial court concluded, because there was evidence that the Restaurant “took no corrective action in spite of repeatedly receiving complaints of sexual harassment,” Vazquez was entitled to present her sexual harassment claim to a jury for resolution.