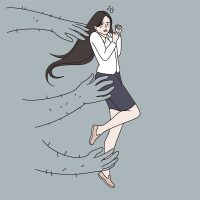 Bonefish Grill is a seafood restaurant chain. In March 2014, Bonefish Grill hired Burke. During his tenure, Burke worked in several kitchen positions. Burke eventually came to operate the grill station, where he worked alongside a male employee named Villa. Burke alleges that Villa subjected him to unwanted sexually harassing behavior over a two-year period. He claims that Villa touched and squeezed his buttocks “whenever an opportunity presented itself for Villa,” rubbed his back, shoulders, arms, and put his hands around Burke’s waist “like a couple,” until Burke shook him off. Burke also alleges that Villa would ask when Burke “was going to let him take Burke home from the bar, or . . . to his house” for “some fun.” Burke came to believe that Villa had a sexual interest in him. Burke claims that he objected to Villa’s sexual advances and often told him to stop touching him.

In February or March 2018, Burke complained to the Culinary Manager, a man named Louis. Burke testified that he told Louis that “Villa continuously touched him,” and Burke “was getting aggravated because Villa would not stop touching him.” Burke claims that Louis laughed in response, then asked whether they wanted Louis to talk to Villa. Burke declined the offer, explaining that he was “baffled” by Louis’ response and that it made him feel that Villa was “almost untouchable.”

In June 2018, Burke complained to the Managing Partner, a man named Sorenson, that Villa was sexually harassing him. Sorenson expressed skepticism about the complaint, but then initiated an investigation into Burke’s allegations. Sorenson testified that, at the end of the investigation, he found no corroborating evidence to prove that Villa sexually harassed Burke. About three weeks after making his complaint to Sorenson, Burke claims that Villa resumed touching and squeezing his buttocks. On September 17, 2018, Sorenson fired Burke for alleged attendance problems.

In rejecting Bonefish Grill’s contention that Villa’s behavior amounted to nothing more than “common horseplay,” the trial court explained that courts have defined sexual harassment for purposes of Title VII to “include unwelcome sexual advances, requests for sexual favors, and other verbal or physical conduct of a sexual nature. In applying this definition of sexual harassment, the trial court determined that Villa’s conduct was “plainly sexual in nature.” In support of its conclusion, the trial court pointed out that Burke alleges that “Villa frequently touched his buttocks,” grabbed him “around the waist like a couple,” “massaged his back and shoulders,” and asked him to come home with him “to have some fun.” Thus, the trial court determined, a jury could reasonably find that Villa’s behavior towards Burke was motivated by “sexual desire.”