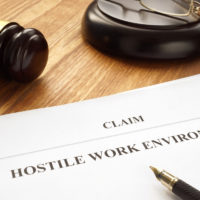 Under Title VII of the Civil Rights Act of 1964 (Title VII), it is an unlawful employment practice for an employer to discriminate against any individual with respect to his or her compensation, terms, conditions, or privileges of employment because of such individual’s sex. Sexual harassment is a form of sex discrimination prohibited by Title VII. Consequently, an employee may establish a violation of Title VII by showing that discrimination based on sex has created a hostile or abusive work environment.

Harassment Need Not Be Both Severe & Pervasive

In applying Supreme Court precedent, courts have acknowledged that the standard for an actionable hostile work environment is whether the sexual harassment was sufficiently severe or pervasive to alter the conditions of the victim’s employment and create a hostile or abusive working environment. Thus, as explained by the U.S. Seventh Circuit Court of Appeals in Cerros v. Steel Tech., Inc., 398 F.3d 944 (7th Cir. 2005), “conduct that is either pervasive or severe may give rise to a hostile work environment.” Indeed, as observed by the Seventh Circuit in Worth v. Tyer, 276 F.3d 249 (7th Cir. 2001), “harassment need not be both severe and pervasive to impose liability: one or other will do.” “[T]he more severe the conduct,” as noted by the U.S. District Court for Maryland in Reed v. Airtran Airways, 531 F.Supp.2d 660 (D. Md. 2008), “the less pervasive the [victim] need prove that it is.” Consequently, as pointed out by the Seventh Circuit in Hostetler v. Quality Dining, Inc., 218 F.3d 798 (7th Cir. 2000), courts have “repeatedly recognized that even one act of harassment will suffice if it is egregious.”

In a more recent decision, the Seventh Circuit in Robinson v. Perales, 2018 WL 3214297 (7th Cir. July 2, 2018) reversed the dismissal of a hostile work environment harassment claim because the district court “misstated the applicable legal standard [by] declaring that the conduct at issue must be severe and pervasive rather than severe or pervasive.” As the Robinson court explained in reversing the district court’s fundamental legal error and failure to account for binding Supreme Court precedent, the “requirement” for establishing a hostile work environment claim “is disjunctive, not conjunctive; the standard may be met by a single extremely serious act of harassment or by a series of less severe acts.”