Does Asking An Employee About His Or Her Physical Ability To Do The Job Reflect Disability Discrimination? 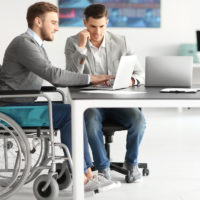 To prove an actual disability under the ADA, an individual must establish that he or she has a physical or mental impairment that substantially limits one or more major life activities. The ADA defines a physical impairment as any physiological disorder or condition affecting one or more body systems, such as neurological, musculoskeletal, respiratory, and cardiovascular. The ADA defines a mental impairment as any mental or psychological disorder, such as intellectual disability, emotional or mental illness, and specific learning disabilities. Major life activities include seeing, hearing, sleeping, walking, standing, lifting, bending, speaking, concentrating, communicating, and working.

Employee Questioned About Physical Ability To Do The Job

The recent decision by the U.S. District Court for Hawaii in Crowley v. Wal-Mart Stores, Inc., 2018 WL 4345251 (D. Hawai’i Sept. 11, 2018) illustrates the expansive scope of the ADA’s “regarded as” definition of disability. In that case, Terrance Crowley (Crowley) brought an ADA claim against his former employer, Wal-Mart Stores, Inc. (Wal-Mart). Crowley alleged that Wal-Mart terminated his employment because it wanted a nondisabled store manager to replace him.

Crowley was employed by Wal-Mart as a store manager. In 2010, 2011, and 2012, Crowley took leave under the Family Medical Leave Act for three surgeries to his ankle. Crowley alleged that a Market Manager named Halsey pressured him to return to work early from each of these surgeries. In March 2013, an employee named Armijo replaced Halsey as the Market Manager and as Crowley’s direct supervisor. Crowley claimed that Armijo, upon seeing Crowley walking with a cane and boot, asked him on several occasions whether he was still able to run the store. Being able to walk around the store was an essential function of Crowley’s store manager position.

Crowley had another ankle surgery in 2014, taking off from August 27, 2014 to October 27, 2014, to recover. On October 27, 2014, Crowley met with Armijo and a Market HR Manager. During the meeting, Crowley was terminated because of alleged safety concerns that went unaddressed, including bald tires on a fork lift.

Employer May Have Regarded Employee As Disabled

Wal-Mart filed a motion with the trial court seeking dismissal of Crowley’s disability discrimination claim. In doing so, Wal-Mart claimed that Crowley failed to establish that he has an actual disability or that Wal-Mart “regarded” Crowley as disabled. In particular, Wal-Mart argued that “asking a person about his or her ability to do his or her job” was insufficient as a matter of law to establish that an employer perceived the employee as disabled. The trial court denied Wal-Mart’s motion and ruled that whether Wal-Mart fired Crowley on the basis of disability was for a jury to decide.

The trial court found that Armijo’s comments to Crowley about whether he was physically able to perform his job as store manager reflected that Armijo “may have regarded Crowley as disabled.” Because Armijo participated in the decision to fire Crowley, the trial court explained, his comments constituted “circumstantial evidence” that Crowley was fired based on his perceived disability. Thus, although Wal-Mart allegedly had a “legitimate nondiscriminatory safety reason for having terminated Crowley,” the trial court concluded, “it is for the jury to decide whether that reason was pretextual given Armijo’s participation in Crowley’s termination.”