Does Firing A Worker Because She Took Maternity Leave Constitute Pregnancy Discrimination? 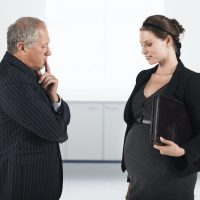 The recent decision in Rayford v. La Petite Academy, Inc., Case No. 19-cv-7877 (N.D. Ill. June 4, 2021) is illustrative of these principles. In that case, a woman named Rayford (Rayford) brought a pregnancy discrimination claim against her former employer, La Petite Academy, Inc. (La Petite) under the PDA. Rayford claims that La Petite violated the PDA by terminating her employment following her maternity leave.

La Petite is a national educational daycare company with locations across the country. In May 2012, Rayford began working for La Petite. In April 2016, she became the director of La Petite’s school in Aurora, Illinois. In January 2018, Rayford informed her supervisor, a woman named Sallay (Sallay) that she was pregnant. In July 2018, Rayford requested leave under the Family Medical Leave Act (FMLA) for the birth of her child. Rayford’s FMLA maternity leave was approved for the time period from September 11, 2018, until November 6, 2018.

You Leaving Is Not A Good Thing

Following the approval of Rayford’s FMLA maternity leave, Rayford and Sallay discussed how the school would cover Rayford’s absence. Rayford testified that Sallay was concerned about her leaving and told her, “you leaving is not a good thing.” Ultimately, Sallay selected a woman named Theobald to oversee operations at the Aurora school while Rayford was on maternity leave.

Rayford gave birth on September 7, 2018, and began her FMLA maternity leave a few days earlier than planned. When Theobald began filling in at the Aurora, she noticed several violations of La Petite policies, including children bringing in outside food to eat during the school day and staff transporting children without proper authorization. Shortly after Rayford returned from FMLA maternity leave in November 2018, Sallay and Rayford met to discuss the policy violations Theobald had uncovered. Sallay decided to terminate Rayford because of the policy violations.

La Petite filed a motion with the trial court seeking dismissal of Rayford’s pregnancy discrimination claim. In support of its motion for dismissal, La Petite proffered a new take on the customary employer argued that the fact that an employee was no longer pregnant at the time of the termination defeats the employee’s claim of pregnancy discrimination. La Petite claimed that the timing of Rayford’s termination was not suspicious—firing her shortly after she returned from maternity leave—because it “knew of [Rayford’s] pregnancy and of her intention to take maternity leave months before she even began her leave, let alone returned from it, and it was only after [Rayford] returned to work” that she was fired. In other words, according to La Petite, firing an employee shortly after she returned from maternity leave is not suspicious because she was no longer pregnant when she was fired.

In addition to the suspicious timing of Rayford’s termination, the trial court found that Rayford’s testimony that Sallay was “displeased about having to find cover for [Rayford’s] maternity leave and told her that “you leaving is not a good thing,” was another “piece of circumstantial evidence” reflecting that La Petite acted with discriminatory intent in terminating Rayford. Combing this evidence with the suspicious timing, the trial court concluded, “a reasonable jury could conclude that the evidence, considered as a whole, is fishy enough to support an inference of discrimination.”