Does Sexual Behavior Towards A Victim At Happy Hour Contribute To A Hostile Work Environment? 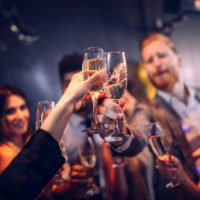 In that case, Haydee Echevarria (Echevarria) brought a sexual harassment lawsuit against her former employer, Utitec, Inc. (Utitec), pursuant to Title VII of the Civil Rights Act of 1964 (Title VII). Echevarria claimed that she was subjected to hostile work environment sexual harassment by an employee of Utitec named Dostaler in violation of Title VII.

Echevarria was employed by Utitec as a receptionist. Dostaler was employed by Utitec as a toolmaker. Dostaler’s alleged harassment began with inappropriate comments, such as remarks about Echevarria’s clothing and lipstick, and inappropriate looks. From there, Dostaler’s alleged sexual behavior escalated during a happy hour at a local bar. Echevarria was not required to attend the happy hour and was not paid for her time at the happy hour. However, the happy hour event was planned at the office by two of her co-workers, who spread invitations by talking to other employees. During the happy hour, Dostaler approached Echevarria on three or four separate occasions. Echevarria alleged that Dostaler tried to feed her food and asked what time she was leaving, whether her husband was home, whether her husband knew she was at happy hour, why she did not let her hair down, and why she seemed uptight.

A few weeks after the happy hour event, Echevarria complained to management about Dostaler’s unwanted sexual behavior. On the morning that Dostaler was purportedly to be verbally reprimanded for his behavior, Echevarria claimed that Dostaler came up behind her and ran his fingers from her neck to the top of her buttocks. Immediately after Dostaler ran his fingers down her back, Echevarria “took off.” Dostaler followed behind her and grabbed her hand for a couple of seconds before she jerked it away. After learning of the incident, Utitec issued Dostaler a written reprimand.

Harasser Not Allowed To Pick Where To Harass

Utitec filed a motion with the trial court seeking dismissal of Echevarria’s sexual harassment claim. In support of its motion for dismissal, Utitec argued that Dostaler’s alleged sexual behavior was not sufficiently severe or pervasive to create a hostile work environment. Utitec further argued that it could not be held responsible for Dostaler’s conduct at the happy hour because it happened after work hours, off-site, and at a non-company event. The trial court denied Utitec’s motion for dismissal and ruled that Echevarria had presented sufficient evidence to establish that she worked in a hostile environment.

In denying Utitec’s motion for dismissal, the trial court concluded that a reasonable jury could find that Dostaler’s alleged sexual behavior was sufficiently severe or pervasive to alter the conditions of Echevarria’s employment and create a hostile work environment. The trial court explained that Dostaler’s alleged conduct “became progressively more invasive, progressing from comments, to touching [Echevarria] with an object (food), to touching [Echevarria] with his own body.” This behavior, the trial court reasoned, “constituted an unwanted invasion of [Echevarria’s] physical space of a highly personal and intimidating nature.”

In denying Utitec’s motion for dismissal, the trial court also rejected Utitec’s argument that it was not responsible for Dostaler’s conduct at the happy hour. The trial court explained that it was not aware of any “settled law that, in gauging the severity or pervasiveness and effects of sexual harassment, allows the offender to compartmentalize his misconduct[;] in other words, to allow a harasser to pick and choose the venue for his assaults so as to not account for those that occur physically outside the workplace.” The trial court also observed that a “practical or constructive extension of the work environment is often necessary because an offender’s license to engage in sexual misconduct towards a co-worker outside the company may derive and draw comfort from his understanding of what is permissible in the workplace or his perception of how far he can push the limits and what discriminatory wrongs against a fellow employee he can inflict with impunity.” “This is particularly true where, as here, harassing conduct occurred during an event planned and attended by a sizable group of co-workers, including two supervisors.” Thus, the trial court concluded, Dostaler’s alleged conduct at the happy hour was part of Echevarria’s work environment and contributed to her working in a hostile environment.