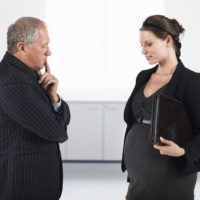 The U.S. Equal Employment Opportunity Commission (EEOC) recently announced that it has filed a pregnancy discrimination lawsuit against The Day & Zimmermann Group, Inc. and Sunrise Beach Corporation, which conduct business as M2 Services Corporation (M2 Services), pursuant to the Pregnancy Discrimination Act (PDA). The PDA protects employees from discrimination on the basis of pregnancy. On January 1, 2019, the EEOC filed the lawsuit, EEOC v. The Day & Zimmermann Group, Inc. and Sunrise Beach Corporation, Case No. 3:19-cv-127, in the U.S. District Court for the Middle District of Florida after initially attempting to reach a pre-litigation settlement through its statutorily mandated conciliation process. In this article, our Marion County, Florida employment discrimination lawyers explain the EEOC’s allegations against M2 Services and illuminate the legal basis for the EEOC’s pregnancy discrimination lawsuit.

M2 Services provides aviation and heavy vehicle maintenance, modification, painting, and overhaul services to the military at National Air Station in Jacksonville, Florida. Jasmine Pates (Pates) was employed by M2 Services as an aircraft cleaner. In this position, Pates was responsible for cleaning aircraft parts and was exposed to dirt, dust, fumes, grease, oils, and cleaning agents.

The EEOC claims that by refusing to allow Pates to return to work despite her ability to work while pregnant, M2 Services fired Pates on the basis of pregnancy in violation of the PDA. Under the PDA, an employer cannot require an employee to take a leave of absence from work because she is pregnant so long as she is able to perform the essential functions of her job. As determined by the U.S. Supreme Court in UAW v. Johnson Controls, 499 U.S. 187 (1991), the “decision to work while [ ] pregnant . . . is reserved for each individual woman to make for herself” and “pregnant women who are able to work must be permitted to work under the same conditions as other employees.” Thus, the PDA prohibits an employer from refusing to allow a pregnant employee to work, or otherwise requiring a pregnant employee to take a leave of absence from work, when she is physically able to work while pregnant.

The EEOC is the administrative agency of the United States responsible for interpreting and enforcing federal laws prohibiting employment discrimination. The EEOC is also authorized by federal law to bring lawsuits on behalf of victims of employment discrimination, including pregnancy discrimination. In a press release regarding the case, the regional attorney for the EEOC’s Miami District Office, Robert E. Weisberg, stated that “it is not for employers to decide whether pregnant women may continue working during their pregnancies—that decision must be made by the employee.”