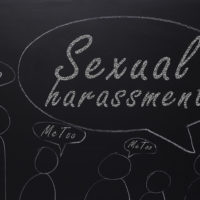 In February 2018, McInnis began working for Hunter Auto. McInnis worked at Hunter Auto’s facility in Charlotte, North Carolina. Beginning in March 2018, McInnis was subjected to unwanted sexually harassing behavior on a daily basis by male co-employees. The unwelcome sexually harassing behavior towards McInnis included sexual comments, sexual propositions, sexual innuendos, rubbing her shoulders, and remarks implying they had sex with her. In May and June 2018, McInnis complained to management about the unwanted sexual harassment. When she complained about the sexual harassment, management told McInnis to “let it go or ignore it.” On other occasions, according to the EEOC, management “excused the behavior by stating that was just the way some of [Hunter Auto’s] employees were.” Because the harassment continued despite her complaints, McInnis notified management on August 28, 2018 that she was resigning because she “could no longer tolerate the sexually hostile work environment.”

The EEOC is the administrative agency of the United States responsible for interpreting and enforcing federal laws prohibiting employment discrimination, including sexual harassment. In enforcing the federal anti-harassment laws, the EEOC is also authorized by federal law to bring lawsuits on behalf of victims of sexual harassment. In a press release issued by the EEOC regarding the case, a Regional Attorney for the EEOC’s Charlotte District Office, Lynnette A. Barnes, stated that “[e]mployers must take reasonable steps to stop employees’ inappropriate sexual comments and behavior in the workplace.” “The EEOC will continue to prosecute cases where employees are harassed in violation of federal law,” Ms. Barnes added, “and the company fails to stop the harassment.”

Based in Ocala, Florida and representing employees throughout Central Florida, we have almost two decades of experience representing sexual harassment victims in cases before the EEOC. If you have been subjected to a sexually hostile work environment or have questions about an employer’s obligation to protect you from sexual harassment in the workplace, please contact our office for a free consultation with our Citrus County, Florida sexual harassment attorneys. Our employment and labor law attorneys take sexual harassment cases on a contingency fee basis. This means that there are no attorney’s fees incurred unless there is a recovery and our attorney’s fees come solely from the monetary award that you recover.