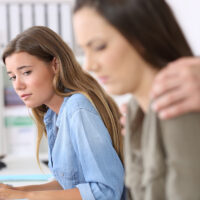 On September 17, 2020, the U.S. Equal Employment Opportunity Commission (EEOC) issued a press release announcing that it has filed a sexual harassment and retaliation lawsuit against GIPHX10, LLC, d/b/a Hawthorn Suites by Wyndham (Hawthorn Suites). On September 17, 2020, the EEOC filed the case, U.S. Equal Employment Opportunity Commission v. GIPHX10, LLC, d/b/a Hawthorn Suites by Wyndham, Case No. 2:20-cv-01369, in the U.S. District Court for the Western District of Washington. Before commencing the civil action, the EEOC initially endeavored to resolve the case through its statutorily mandated conciliation process. Conciliation efforts having failed to resolve the case, the EEOC then elected to address the alleged unlawful employment practices by filing the lawsuit. In this article, our Lecanto Florida attorneys for sexual harassment explain the EEOC’s allegations against Hawthorn Suites.

The EEOC has filed the sexual harassment and retaliation lawsuit pursuant to Title VII of the Civil Rights Act of 1964 (Title VII) on behalf of two employees of Hawthorn Suites, Sofia Vera Rodriguez (Vera) and Maria Cruz Conteras Ramirez (Conteras). Title VII, which is the foundation of Congressional efforts to eradicate discrimination from the American workplace, protects employees from discrimination on the basis of gender. Sexual harassment is a form of gender discrimination prohibited by Title VII. Sexual harassing behavior which is sufficiently severe or pervasive to alter the conditions of the victim’s employment and create a hostile working environment is forbidden by Title VII. Under Title VII, employees are also protected from retaliation when they lodge a complaint about perceived sexual harassment in the workplace.

The EEOC is the administrative agency of the United States responsible for interpreting and enforcing federal labor laws forbidding discrimination, harassment, and retaliation in the workplace. As part of its administrative enforcement of the federal labor laws, the EEOC files lawsuits on behalf of victims of unlawful employment discrimination, including victims of unlawful sexual harassment and retaliation. In a press release issued by the EEOC on September 17, 2020 regarding the case, the Director of the EEOC’s Seattle Field Office, Nancy Sienko, explained that “according to the EEOC’s Select Task Force on the Study of Harassment in the Workplace, the risk of harassment often increases in workplaces with significant power disparities, isolated workplaces, and employees with limited English proficiency.” In further commenting on the case, Ms. Sienko stated that “employers should ensure that workers receive information regarding harassment policies in a language and manner they understand.” “In this case,” Ms. Sienko added, “both women were monolingual Spanish speakers, but none of Hawthorn’s anti-discrimination policies and procedures were available in Spanish.”