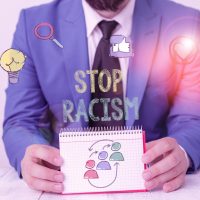 CCC Group is a construction company based in San Antonio, Texas. In May 2016, Williams, who is African-American, began working for CCC Group. Williams worked at CCC Group’s construction site in Ravena, New York. The EEOC claims that Williams, along with other African-American employees, were subjected to severe and pervasive racial harassment, including “numerous racist, stereotypical, and demeaning comments, slurs, jokes, and threats.”

Williams was also asked by a white employee if Williams wanted to go trick-or-treating with him, telling Williams: “you don’t even have to dress up. I will dress in white and put a noose around your neck and we’ll walk down the street together.” On another occasion, a white foreman tied a rope into a noose and laid it on the ground to ensnare Williams. As Williams approached the noose, the white foreman dragged the noose on the ground in front of Williams. The EEOC contends that Williams and other African-American employees continuously complained about the racially abusive behavior in the workplace. Despite the repeated complaints of racial harassment, the EEOC maintains, CCC Group “did nothing and the harassment continued unabated.”

The EEOC is the administrative agency of the federal government responsible for interpreting and enforcing federal employment discrimination law. In enforcing federal employment discrimination law, the EEOC brings lawsuits in federal court on behalf of employment discrimination victims, including employees required to work in a racial hostile environment. In a press release issued on August 10, 2021 regarding the case, a regional attorney for the EEOC’s New York District Office, Jeffrey Burstein, observed that “the allegations of racial harassment in this case were especially vicious.” In commenting on the case, the Director of the EEOC’s New York District Office, Judy Keenan, explained that “employers must take immediate and effective steps to prevent and eradicate the kind of racial harassment that was alleged in this case.”