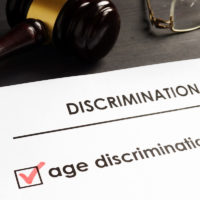 Having litigated age discrimination lawsuits for nearly twenty years, our Marion County, Florida age discrimination lawyers have learned that age discrimination remains a serious problem in the American workplace. As explained by the U.S. Supreme Court in Hazen Paper Co. v. Biggins, 507 U.S. 613 (1993), Congress enacted the Age Discrimination in Employment Act (ADEA) in 1967 because of “its concern that older workers were being deprived of employment opportunities on the basis of inaccurate and stigmatizing stereotypes.” Thus, as determined by the Supreme Court in Western Air Lines, Inc. v. Criswell, 472 U.S. 400 (1985), the ADEA mandates that “employers are to evaluate their employees . . . on the basis of their merits and not their age.” Despite the ADEA’s command, older workers continue to face significant obstacles in their efforts to retain employment. The alleged facts in an age discrimination case recently settled by the U.S. Equal Employment Opportunity Commission (EEOC) are illustrative of an older employee’s plight to retain employment.

The EEOC is the administrative agency of the United States responsible for interpreting and enforcing federal laws prohibiting employment discrimination. In enforcing the federal anti-discrimination laws, the EEOC is also authorized by federal law to bring lawsuits on behalf of victims of employment discrimination, including age discrimination. In a press release issued by the EEOC regarding the case, a Regional Attorney for the EEOC’s Charlotte District Office, Lynette Barnes, stated that “[e]mployers who made age-based employment decisions are at risk of violating the ADEA when those decisions impact persons over the age of 40.” “The EEOC is committed to combatting this practice,” Ms. Barnes added, “and enforcing the ADEA against employers who discriminate against older workers.”