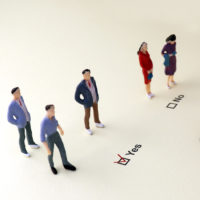 Title VII of the Civil Rights Act of 1964 (Title VII) prohibits employers from discriminating against employees on the basis of sex. “In forbidding employers to discriminate against individuals because of their sex,” as explained by the U.S. Supreme Court in City of Los Angeles Dept. of Water and Power v. Manhart, 435 U.S. 702 (1978), “Congress intended to strike at the entire spectrum of disparate treatment of men and women resulting from sex stereotypes.”

Although Title VII was enacted in 1964, our Marion County, Florida gender discrimination attorneys have learned that sex discrimination against women persists as a significant problem in the workplace. Women continue to endure sexist remarks, stereotyped beliefs about the different roles and abilities of men and women, unequal pay, and less opportunity for high level advancement. The recent decision by the U.S. District Court for the Western District of Pennsylvania in Knox v. PPG Industries, Inc., 2018 WL 1334828 (W.D. Pa. March 15, 2018) illustrates many of the types of problems that women continue to encounter in the workplace.

In that case, Carol Knox (Knox) claimed that her former employer, PPG Industries, Inc. (PPG), terminated her on the basis of sex in violation of Title VII. Knox was employed by PPG for 23 years. From 2007 through 2013, Knox held the position of Senior Research Associate. In 2008, Knox became the Project Manager of PPG’s Teslin research and development group. The Teslin group was divided into two sectors: research and development and business.

From 2010 until her termination, Knox was supervised by an employee named Wilt. At the time of her termination, Knox was the only woman among Wilt’s five direct reports. Knox alleged that during her first meeting with Wilt, he told her that he was “uncomfortable around women,” and then said, “I had a girl work for me before and she went into business, I think women are better suited in business, you should think about going into business.” Knox further alleged that she was denied her customary pay raise when Wilt took over as her supervisor, and that Wilt denied her subsequent requests for a raise in 2011, 2012, and 2013.

During the time of Wilt’s supervision, Knox asserted that Wilt directed sexist remarks at her, such as “women are usually tree hugging Democrats,” called one of her projects a “woman’s project,” and routinely referred to adult women as “girls.” Knox also alleged that Wilt tried to push her out of his group in June 2013 by encouraging her to accept an offer to transfer to another position. When she told Wilt that she decided not to transfer, Knox claimed that Wilt became “irate and physically menacing” to her. Knox further alleged that Wilt started screaming, telling her, “I can’t believe this” and “you should reconsider.”

A few weeks after she rejected the offer to transfer to another position, Knox alleged that Wilt falsely accused her of sending an anonymous email to PPG employees and conducted a sham investigation in order to have her fired. Knox claimed that the real reason for her termination was that Wilt did not want her to work in his group because she is a woman. After her termination, Knox was replaced by a male employee.

PPG filed a motion with the trial court seeking dismissal of Knox’s sex discrimination claim. In moving for dismissal, PPG argued that Knox was not fired because of her gender, but for sending an anonymous email to PPG employees and failing to cooperate with PPG’s investigation to determine who sent the email. Because it allegedly had a legitimate basis for firing Knox, PPG asked the trial to find that Knox’s sex discrimination claim was meritless and Knox could not bring her sex discrimination claim before a jury. The trial court denied PPG’s motion for dismissal and ruled that whether Knox was fired because of her gender must be resolved by a jury.

In denying PPG’s motion for dismissal, the trial court pointed out that Wilt was “one of the decision-makers actively involved in Knox’s termination.” Because he was a decision-maker, the trial court explained, Wilt’s sex-based remarks were highly “relevant in determining whether sex-based animus motivated” Knox’s termination. “Based on the totality of Wilt’s alleged behavior,” the trial court found, a jury could conclude that “Wilt’s desire for Knox to transfer in 2013, his anger when she did not, and her subsequent termination just a few weeks later, were motivated by gender animus.” The trial court further found that, “based on the totality of Wilt’s behavior,” a jury could conclude that PPG’s investigation into whether Knox sent the anonymous email was a “convenient ruse” that was “initiated as a pretext for [PPG’s] decision to terminate [Knox] on the basis of her gender.” Consequently, the trial court concluded that Knox had produced sufficient evidence for a jury to find that she was fired because of her gender in violation of Title VII.