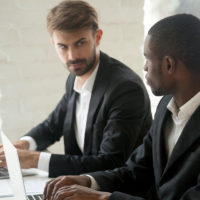 Under Title VII of the Civil Rights Act of 1964 (Title VII), an employer cannot retaliate against an employee because the employee has complained about discrimination on the basis of race, color, national origin, sex, or religion. As explained by the U.S. Second Circuit Court of Appeals in Matima v. Celli, 238 F.3d 69 (2d Cir. 2000), Title VII “protects employees in the filing of formal charges of discrimination as well as the making of informal protests of discrimination, including making complaints to management.” In order to be protected from retaliation, an employee is not required to establish that the perceived discrimination was in fact a violation of Title VII, but rather, only that he or she had a good faith, reasonable belief that the perceived discrimination was unlawful.

In dedicating their practice to fighting for the rights of victims of employment discrimination and retaliation, our Citrus County, Florida retaliation attorneys have learned that employees who harbor discriminatory animus frequently seek to punish employees who have complained about their perceived discriminatory behavior in the workplace. Indeed, after complaining about workplace discrimination, employees often find themselves subjected to insults, physical threats, work sabotage, false allegations of misconduct, and threats of termination. The recent decision by the U.S. Fourth Circuit Court of Appeals in Strothers v. City of Laurel, Maryland, No. 17-1237 (4th Cir. July 6, 2018) illustrates how Title VII’s anti-retaliation provision protects employees from retaliation after they complain about perceived discriminatory behavior in the workplace.

Employee Harassed From Day One Of Employment

In that case, Felicia Strothers (Strothers) brought a Title VII action against her former employer, the City of Laurel, Maryland (the City), claiming that she was fired in retaliation for making a discrimination complaint. Strothers, who is African-American, worked for the City in the Department of Communications. Strothers claims that from day one of her employment with the City she was singled out for race-based harassment by her supervisor, Koubek. Before she was hired by the City, Strothers was interviewed by four representatives from the City, including Koubek. One of the City’s representatives, Director Piringer, would later reveal that Koubek did not want to hire Strothers and that Koubek “wanted to hire someone of a different race.”

Strothers’ problems with Koubek began on her first day of work. Although Strothers had an agreement with Director Piringer that she could arrive for work at 9:05 am instead of 9:00 am because of her children’s bus schedule, Koubek marked her tardy because Strothers began work at 9:05 am. Even though Koubek knew of the agreement with Director Piringer, Koubek decided that Strothers had to be in the office at 8:55 am. Koubek then told Strothers that she would have a few weeks during which she could arrive at 9:05 am, but thereafter would then have to find alternative arrangements for her children.

Although Koubek purported to give Strothers a few weeks to adjust her schedule, Koubek began keeping a detailed log of Strothers’ daily arrival time. Koubek then submitted the arrival log to human resources with the explanation that Strothers’ alleged tardiness exemplified problematic behavior. Koubek also tracked every absence of Strothers from her desk, including bathroom breaks, meals, and outside appointments. Koubek further required Strothers to go home and change her pants because of a purported dress code violation. Koubek then deducted the amount of time it took Strothers’ to go home and change from her personal leave time. Koubek also gave Strothers a negative three-month evaluation even though she conceded at her deposition that Strothers did everything she was asked to do.

The trial court found that Strothers did not have a good faith, reasonable belief that she was being harassed because of her race in violation of Title VII and dismissed Strothers’ retaliation claim. In doing so, the trial court “adopted the most charitable interpretation possible” of Koubek’s remark that she wanted to hire someone of a different race than Strothers. In particular, the trial court discounted the racial nature of the remark based on Koubek’s testimony that “she preferred the white candidate because of the white candidate’s prior experience working for the city.” Seizing on Koubek’s ostensibly benign intent, the trial court then concluded that “it was only coincidental that the preferred candidate happened to be white and the employee who subjected to unwelcome conduct happened to be black.” On appeal, the Fourth Circuit reversed the trial court’s decision and reinstated Strothers’ retaliation claim.

Unlike the trial court, the Fourth Circuit found that Strothers’ belief that she was being harassed because of her race in violation of Title VII was objectively reasonable. In support of this conclusion, the appellate court pointed to evidence showing that Strothers’ endured a pattern of “constant surveillance, badgering, and criticism.” The court of appeals also noted that Director Piringer’s disclosure that Koubek wanted to hire someone of a different race reflected that he believed “Strothers’ race explained why [Koubek] was harassing her.” “In other words,” the appellate court reasoned, “Strothers’ employer injected Strothers’ race into the equation and gave her reason to think that her race was relevant to the harassment she was experiencing.” The court of appeals also observed that Strothers had reason to believe that she was being harassed because of her race as “former City employees [ ] explicitly warned her about Koubek’s history of harassing black employees.”

In reversing the trial court, the Fourth Circuit also found a direct link between Strothers’ discrimination complaint and termination. The appellate court pointed out that Strothers submitted an informal memo on February 26 and sent an e-mail on March 6 stating that she intended to file a formal grievance on March 7. “The very next day,” the court of appeals noted, the City fired Strothers. Because of the very close timing between Strothers’ discrimination complaint and termination, the Fourth Circuit concluded, Strothers had produced sufficient evidence to establish that she was fired in retaliation for complaining about discrimination.

Based in Ocala, Florida and representing employees throughout Central Florida, we have extensive experience representing employees who have been retaliated against for complaining about race discrimination. If you have been the victim of retaliation or have questions about your protection from retaliation, please contact our office for a free consultation with our Citrus County, Florida retaliation attorneys. Our employee rights law firm takes retaliation cases on a contingency fee basis. This means that there are no attorney’s fees incurred unless there is a recovery and our attorney’s fees come solely from the monetary award that you recover.