Can Employers Require Pregnant Employees To Quit Or Be Fired Once They Are Six Months Pregnant? 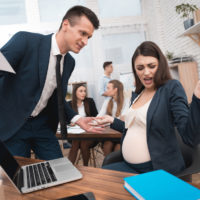 Having litigated pregnancy discrimination cases in Florida state and federal courts for almost two decades, our Citrus County, Florida pregnancy discrimination attorneys know that many employers act as of the Pregnancy Discrimination Act (PDA) does not exist. The PDA makes it unlawful for employers to discriminate against women on the basis of pregnancy, childbirth, or related medical conditions. One way in which employers commonly violate the PDA is by forcing employees to stop working because they are pregnant.

Under the PDA, employers are forbidden from requiring an employee to stop working, whether by forced leave or forced resignation, because she is pregnant so long as she is able to perform the essential functions of the position held. Under the PDA, as explained by the U.S. Supreme Court in UAW v. Johnson Controls, 499 U.S. 187 (1991), the “decision to work while [ ] being pregnant . . . is reserved for each individual women to make for herself” and “pregnant women who are able to work must be permitted to work under the same conditions as other employees.” Thus, an employer’s policy or practice that requires a pregnant employee to stop working regardless of her ability to continue working is unlawful pregnancy discrimination in violation of the PDA.

A pregnancy discrimination lawsuit brought by the U.S. Equal Employment Opportunity Commission (EEOC) illustrates that employers cannot force pregnant employees to stop working when they are able to perform the essential functions of their job. In August 2017, the EEOC filed the lawsuit, EEOC v. Ichiban Japanese Restaurant, LLC, d/b/a Ichiban Japanese Steakhouse, Case No. 2:17-cv-13164, in the U.S. District Court for the Eastern District of Michigan after initially attempting to reach a pre-litigation settlement through its statutorily mandated conciliation process. The EEOC brought the pregnancy discrimination lawsuit pursuant to the PDA on behalf of a former employee of Ichiban Japanese Steakhouse (Ichiban), Rachel Creech-Schultz (Creech-Schultz). The EEOC alleged that Ichiban fired Creech-Schultz because of her pregnancy in violation of the PDA.

Ichiban operates Japanese steakhouses throughout metro Detroit. The EEOC claimed that Ichiban maintained a policy which requires employees to voluntarily resign or be fired once they are six months pregnant. Ichiban fired Creech-Schultz, according to the EECO, because she was six months pregnant. The EEOC maintained that Ichiban’s policy violated the PDA because Creech-Schultz was lawfully permitted to continue working so long as she could perform the essential functions of her position. In forcing Creech-Schultz to elect between a voluntary resignation or termination once she was six months pregnant, Ichiban’s policy unlawfully required Creech-Schultz to stop working because of her pregnancy regardless of whether she was able to perform the essential functions of her position. In terminating Creech-Schultz’s employment pursuant to its unlawful policy, the EEOC contended, Ichiban violated the PDA.