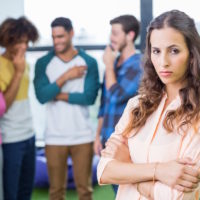 Having represented victims of hostile work environment harassment for nearly twenty years, our Alachua County, Florida harassment attorneys have learned that employers often adopt a “see no evil, hear no evil” strategy when employees are subjected to discriminatory harassment by customers. In failing to take action to protect employees from customer harassment, employers invariably argue that they should not be held liable for the harassment because they do not have control over a nonemployee’s conduct. However, as explained by the U.S. Tenth Circuit Court of Appeals in Lockard v. Pizza Hut, 162 F.3d 1062 (10th Cir. 1998), “an employer who condones or tolerates the creation of a [hostile] environment should be liable regardless of whether the environment was created by a co-employee or a nonemployee, since the employer ultimately controls the conditions of the work environment.” Echoing the reasoning in Lockard, the decision by the U.S. District Court for Puerto Rico in Rivera-Cruz v. Hewitt Associates Caribe, Inc., No. 15-1454 (D. Puerto Rico April 6, 2018) is instructive in showing that employers are liable for customer harassment of employees when they fail to take immediate and effective action to halt the harassment.

Employee Endures Abuse About Her Accent

In that case, Nilda Rivera-Cruz (Rivera) sued her former employer, Hewitt Associates Caribe, Inc. (Hewitt), pursuant to Title VII of the Civil Rights Act of 1964 (Title VII). Rivera alleged that she was subjected to hostile work environment harassment because of her national origin in violation of Title VII.

Rivera worked as a customer service representative for a call center in Puerto Rico. In this position, Rivera answered calls from mostly stateside English-speaking Home Depot employees. Rivera claimed that she was subjected to continuous derogatory comments about her accent while she tried to assist these customers with benefits-related concerns. The derogatory remarks about Rivera’s accent included: “You have a really heavy accent that I can’t stand;” “I cannot stand your accent;” “Your stupid accent makes me sick;” and “You will have to excuse me, but with your accent all I think of is booze.”

Rivera further claimed that she was abused about her Puerto Rican national origin when customers learned that she was in Puerto Rico. The abusive comments about Rivera’s Puerto Rican national origin included: “You aliens are everywhere;” “Your stupid laws and procedures in Puerto Rico do not apply to us in the USA, transfer this call immediately to a supervisor so I can tell them to try, within your limited capacity, to train you people from Puerto Rico better for this kind of situation;” and “No wonder you cannot help me, you people don’t have enough brain space to learn new tricks.” Rivera was also asked by customers if she was “on drugs or drink like all of you.”

Hewitt filed a motion with the trial court seeking dismissal of Rivera’s hostile work environment harassment claim. In doing so, Hewitt advanced two principal arguments in support of its motion for dismissal. First, Hewitt claimed that the harassment Rivera allegedly experienced was not sufficiently severe or pervasive to create a hostile work environment. Second, Hewitt argued that even if sufficiently severe or pervasive to create a hostile work environment, it was not liable for the harassment because it did not have any control over the customers. Although it allegedly had no control over the customers, Hewitt maintained that it nonetheless took appropriate corrective action to prevent any harassment from continuing by allowing customer service representatives, including Rivera, to transfer calls when they were not comfortable with the caller.

The trial court denied Hewitt’s motion for dismissal. The trial court found that the abusive comments Rivera endured about her accent and Puerto Rican national origin were sufficiently severe or pervasive to alter the conditions of her employment and create a hostile work environment. In rejecting Hewitt’s argument that it was not liable for the harassment because it purportedly had no control over the customers, the trial court explained that courts have consistently held that an employer is liable for customer harassment when it ratifies the harassment by failing to take immediate corrective action to prevent the harassment from continuing.

Having found that Hewitt was obligated to take remedial action, the trial court also found that Hewitt’s response to the harassment was deficient. The trial court pointed out that although Hewitt asserted that Rivera could transfer calls when she was not comfortable with a caller, Rivera claimed that she was instructed to calm callers down “if the call started to escalate.” “It is unclear how instructing an employee to try to calm down a caller using insulting language,” the trial court observed, “is an appropriate response to protect the employee from that language.” Thus, the trial court determined that although Hewitt had knowledge that Rivera was being harassed by customers, Hewitt failed to demonstrate that it took prompt and effective remedial action to prevent the harassment from continuing. Consequently, the trial court concluded that a reasonable jury could find that Hewitt ratified the harassment by failing to take immediate corrective action.

Based in Ocala, Florida and representing employees throughout Central Florida, we have extensive experience representing victims of hostile work environment harassment. If you have been harassed at work or have questions about your rights under employment discrimination laws, please contact our office for a free consultation with our Alachua County, Florida harassment attorneys. Our employee rights law firm takes harassment cases on a contingency fee basis. This means that there are no attorney’s fees incurred unless there is a recovery and our attorney’s fees come solely from the monetary award that you recover.