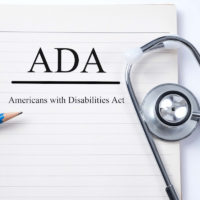 In that case, Robert Hurtt (Hurtt) claimed that his former employer, International Services, Inc. (ISI), discriminated against him on the basis of disability in violation of the ADA. Hurtt was employed by ISI as a business analyst. ISI provides management and tax consulting services to businesses. Hurtt’s position required him to travel to various business locations to convince the business to purchase a “survey” from a senior business consultant. In essence, Hurtt’s job was that of a traveling salesperson.

When hiring him, ISI agreed to give Hurtt a twelve percent commission, a $70,000 per year “draw,” pre-paid work-related flights, hotels, car rentals, and a $40 per diem for food during his travels. According to Hurtt, the $70,000 draw meant that if he made commission income above $70,000, he would keep the difference, but if he made less than $70,000, he would not have to repay the $70,000. Hurtt further claimed that ISI also agreed to give him a four-day work week, with two assignments per week.

Shortly after his employment began, Hurtt began traveling extensively with little time for sleep. Hurtt was prescribed sleeping pills, but claimed they gave him migraines if he did not get the adequate amount of sleep. Hurtt testified that “it got to the point where I would be traveling 1:00, 2:00 in the morning . . . and then try to open and function the next day.” Hurtt provided a supervisor named Brewer with a note from his doctor documenting hypertension, chronic cough, upper respiratory infection, dizziness, sinusitis, and mental fatigue. Hurtt’s doctor recommended “sleep hygiene” and time off from traveling. After receiving the doctor’s note, Brewer told Hurtt to “toughen up.”

Hurtt claimed that after he requested time off for sleep and a four-hour work week, ISI threatened to take away his draw. According to Hurtt, he communicated with Brewer “over and over again” about his need for down-time between assignments. Hurtt testified that he asked Brewer on an “almost weekly basis” about “going back to the original agreement of the four-day work week” so that he had “adequate time to recoup” and sleep, to no avail.

Ultimately, Hurtt was diagnosed by a therapist with acute anxiety and depression. In a letter submitted to ISI, Hurtt’s doctor placed him on a leave of absence from September 1 through September 4 and notified ISI that Hurtt might require additional time off from work over the next nine to twelve months. On September 4, Hurtt submitted a request for time off from work when his acute anxiety and depression flared up. The next day, ISI terminated Hurtt’s $70,000 draw. Hurtt was placed on a commission-only scale, and his pre-paid travel expenses were terminated. Hurtt’s placement on commission resulted in him becoming immediately indebted to ISI for over $22,000 in “advanced, unearned commissions.”

Hurtt did not report to work on September 5. Hurtt requested that he be allowed to “continue to do the same job under the same compensation agreement” in place before his leave of absence from work. Hurtt testified that the new compensation and travel arrangements made it impossible for him to return. Hurtt continued to communicate with Brewer about his need for the $70,000 draw. On September 18, Hurtt notified ISI that he would not be returning to work.

In his ADA lawsuit, Hurtt claimed that that he was constructively discharged because his working conditions become intolerable due to ISI’s failure to reasonably accommodate his disability. The trial court dismissed Hurtt’s disability discrimination claim. In doing so, the trial court found that Hurtt could not establish that he suffered an adverse employment action within the meaning of the ADA because he voluntarily quit. On appeal, the Sixth Circuit reversed the trial court’s decision and reinstated Hurtt’s disability discrimination claim.

At the outset of its opinion, the Sixth Circuit condemned the trial court for an “analysis of Hurtt’s disability discrimination claim [that] was cursory at best.” The appellate court further found that the trial court ignored well-established precedent that a constructive discharge constitutes an adverse employment action for purposes of the ADA. Indeed, the court of appeals explained, courts have repeatedly held that an employee may establish an adverse employment action by demonstrating that he or she was constructively discharged.

Having condemned the trial court’s factual and legal analysis, the Sixth Circuit observed that an employee may demonstrate a constructive discharge when there is “a complete failure to accommodate, in the face of repeated requests.” Applying this principle to the facts, the appellate court noted that Hurtt “repeatedly requested an accommodation of eight hours of sleep per night during his travel due to his documented medical needs.” Despite Hurtt’s repeated requests for an accommodation, ISI “failed to accommodate, or even discuss with hurt any resolution of his request.” Moreover, the appellate court noted, “Hurtt testified that he informed Brewer that without his guaranteed draw, he would not be able to afford working at ISI.” Thus, the Sixth Circuit concluded, “assuming that Hurtt was denied a reasonable accommodation,” and his draw was “guaranteed” and thus “wrongfully terminated,” a reasonable jury could find that “ISI knew that Hurtt’s working conditions would become so intolerable as [to] force Hurtt to quit.”