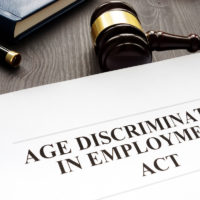 In that case, Ralph Wheat (Wheat) sued his former employer, Rogers & Willard, Inc. (R & W), pursuant to the Age Discrimination in Employment Act (ADEA). Wheat claimed that R & W fired him because of his age in violation of the ADEA. Wheat was employed by R & W as a project manager until he was terminated on May 2, 2014 at the age of 77. The majority owners of R & W, Rogers and Willard, made the termination decision.

Wheat’s claim that he was fired because of his age was based on notes prepared by Rogers on May 29, 2013 from a conference he attended that month. In the notes, Rogers stated: “Fire all the old people”; “many large companies bringing in new blood”; “Paint a vision of what company will look like in three years, i.e., new, younger employees.” The parties agreed that Wheat was the “Ralph” referenced in Rogers’ notes.

The evidence established that R & W began terminating the employment of older workers no more than seven months after Rogers’ notes were prepared. In 2013, R & W fired a receptionist who was in her 60’s and accepted the coerced resignation of a superintendent who was in his 60’s. In February 2014, R & W “non-renewed” a contact manager named Jerry, identified as one of the “older guys” in Rogers’ notes, who was 73.

The trial court denied R & W’s motion for dismissal and ruled that Rogers’ notes constituted sufficient evidence for a jury to find that Wheat was fired because of his age. The trial court found that Rogers’ notes were direct or “smoking gun” evidence that Wheat was fired on the basis of his age because the notes say “Fire all the old people” with Wheat identified as an “older guy.” The trial court explained that saying “fire all the old people” is “to fire them precisely because they are old” and identifying Wheat as an “older guy” directly “marks him for termination because of his age.” “There is not the slightest subtlety or ambiguity” in Rogers’ statement, the trial court observed, “and it falls within the most blatant of remarks” whose intent could be nothing other than to discriminate on the basis of age.