Employers Continue To Refuse To Hire Women For “Men’s Jobs” 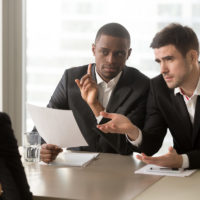 Title VII of the Civil Rights Act of 1964 (Title VII) bans discrimination on the basis of sex in the workplace. Since the passage of Title VII, women have made significant gains in workforce participation, wages, benefits, and access to high-level positions. However, gender segregation persists in many occupations in the U.S. workforce. For example, jobs in traditionally blue-collar fields, such as manual labor, repair, and construction, are still predominately held by men.

Having long represented victims suffering from sex discrimination, our Alachua County, Florida gender discrimination attorneys have learned that women continue to endure systemic discrimination in traditionally blue-collar fields. Simply stated, employers continue to refuse to hire women for “men’s jobs.” However, under the regulations promulgated by the U.S. Equal Employment Opportunity Commission in enforcing Title VII’s mandate of equal treatment, the “principle of nondiscrimination requires that individuals be considered on the basis of individual capacities and not on the basis of any characteristics attributed to the group.” The decision by the U.S. Second Circuit Court of Appeals in Walsh v. N.Y. City Housing Authority, 828 F.3d 70 (2d Cir. 2016) is illustrative of the types of barriers that women still confront when seeking employment in fields dominated by men.

Gender Bias in Hiring Study – No Women Employed As Bricklayers

In that case, Rita Walsh (Walsh) brought a Title VII action against the New York City Housing Authority (NYCHA) claiming that she was not hired for the position of bricklayer because of her gender. NYCHA interviewed Walsh and five male candidates for five open bricklayer positions. At the time of the interviews, no women were employed by NYCHA as bricklayers, and as far as the interviewers knew, no women had ever held the position. The interviewers unanimously decided not to hire Walsh and to hire the five male candidates. Walsh testified that after all the interviews had concluded, a human resources representative told her that she did not get the job because the interviewers wanted someone stronger. NYCHA claimed that Walsh was not hired because of her lack of experience. After the trial court dismissed her sex discrimination case, Walsh appealed the dismissal to the Second Circuit.

“Zero Is Not Just Another Number”

In reversing the trial court’s dismissal and reinstating Walsh’s sex discrimination claim, the Second Circuit condemned the trial court’s piecemeal approach of evaluating the evidence. Instead of viewing Walsh’s evidence as a whole to determine whether the decision not to hire Walsh was motivated by gender discrimination, the trial court required each piece of evidence, standing alone, to establish that Walsh was not hired because she is a woman. However, the court of appeals explained, “[n]o one piece of evidence need be sufficient, standing alone, to permit [a jury] to infer that [the] employment decision was more likely than not motivated in part by discrimination.”

In carving up the evidence in a piecemeal fashion and setting aside each piece of evidence after deeming it insufficient to prove gender discrimination, the Second Circuit found that the trial court improperly minimized the absence of female bricklayers at NYCHA. The appellate court stated that “a court cannot help but be circumspect when a municipal department in the country’s largest city repeatedly selects only applicants of one sex for job vacancies—after all, zero is not just another number.” The “dearth of female bricklayers” was evidence, the court of appeals found, which may permit a jury to infer that NYCHA refused to hire Walsh because she is a woman.

The Second Circuit also found that the trial court’s refusal to consider, “particularly in the context” of its “piecemeal approach of evaluating the evidence,” the remark by the human resources representative that Walsh did not get the job because the interviewers wanted someone strong as evidence of a discriminatory motive was improper. The appellate court explained that the remark was “relevant to the issue of discriminatory motive” because “stereotyped remarks can certainly be evidence that gender played a part in an adverse employment action.” Thus, the remark was evidence that the “interviewers succumbed to a sex-based stereotype” in refusing to hire Walsh. Consequently, the Second Circuit concluded that when all of Walsh’s evidence was viewed as a whole rather than in a piecemeal fashion, a jury could find that “NYCHA’s decision not to hire her was more likely than not motivated in part by sex-based discrimination.”

Based in Ocala, Florida and representing employees throughout Central Florida, we have been litigating sex discrimination cases for almost twenty years. If you have been the victim of gender discrimination or have questions about not being hired for “men’s jobs,” please contact our office for a free consultation with out Alachua County, Florida gender discrimination attorneys. Our employee rights law firm takes sex discrimination cases on a contingency fee basis. This means that there are no attorney’s fees incurred unless there is a recovery and our attorney’s fees come solely from the monetary award that you recover.