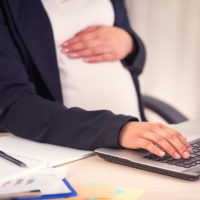 In that case, the owner of CFS hired Raines after interviewing her for employment. About two weeks after she was hired as skin care specialist, Raines told the owner that she was pregnant. Two days later, CFS removed Raines from the work schedule. When Raines asked the owner why her hours were being reduced after notifying him of her pregnancy, the owner told her he felt deceived that she had not notified him of her pregnancy before she was hired. After Raines told the owner that she was capable of performing her duties, the owner told Raines that she could not work for CFS because she deceived him by not telling him that she was pregnant. The EEOC claimed that CFS terminated Raines’ employment because of her pregnancy in violation of the Pregnancy Discrimination Act. On November 30, 2015, the EEOC and CFS entered into a Consent Decree wherein CFS agreed to pay Raines $37,000 to resolve the lawsuit.

In the CFS case, the EEOC had three related pieces of evidence that could be used to establish that Raines was fired because of her pregnancy.

Although not alleged by the EEOC as existing in the CFS case, other types of evidence can be used to prove pregnancy discrimination when an employer fires a pregnant employee after learning that she was pregnant when hired. Evidence that the employee’s pregnancy was a motivating factor for the termination includes:

* Treating the pregnant employee differently and less favorably from non-pregnant employees.
* Targeting the pregnant employee for adverse employment actions after learning that she is pregnant, such as reducing her hours, giving her an unfavorable work schedule, subjecting her to disciplinary action, giving her work performance improvement plans, or demoting her.
* Remarks reflecting negative stereotypes about pregnant employees’ reliability, job commitment, emotional state, physical ability to do the work, or work attendance.
* Remarks reflecting displeasure, anger, or annoyance about the employee’s pregnancy or pregnancy-related medical conditions.

We have extensive experience representing individuals who have been the victim of pregnancy discrimination. If you have been discriminated against on the basis of pregnancy, or have questions regarding your rights as a pregnant employee, please contact our office for a free consultation.