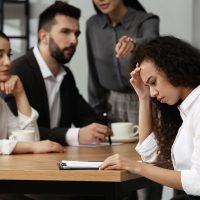 For more than twenty years, our Marion County, Florida employment lawyers have fought for the rights of race discrimination victims. Over more than two decades, we’ve learned that civil rights victories are hard-fought, and when advocates for discrimination push society backward, you can only fight even harder. The State of Florida has never been at the forefront of civil rights progression, but not every effort by regressive lawmakers to curb societal progress is equally successful.

As we previously discussed, in April, Governor DeSantis signed a law intended to prevent workplaces and schools from countering discrimination. The so-called “Stop-Woke Act” prohibits certain kinds of anti-discrimination training, for fear that “corporate wokeness” would make (white, male) workers feel “guilty” about their sex or race. The law was immediately challenged in court and, in a victory for civil rights advocates, a federal court in Florida preliminarily enjoined enforcement of the law.

Also called the Individual Freedom Act (IFA) or, according to Governor DeSantis, the “Stop Woke Act,” House Bill 7 amended the Florida Civil Rights Act of 1992 to prohibit specific forms of diversity training or other activities. The law specifically prohibited employers from requiring employees to attend training or other “required activity” that “espouses, promotes, advances, inculcates, or compels [employees] to believe” any of eight specified “concepts” concerning race, sex, and other protected characteristics.

The prohibited concepts included things like believing that individuals are “inherently racist, sexist, or oppressive” by virtue of their sex or race, that individuals of a given group should be treated adversely to “achieve diversity, equity, or inclusion,” or that individuals should feel “guilt, anguish, or other forms of psychological distress” because of past actions by other members of their group. The effect was to stop employers from offering diversity, equity, and inclusion (DEI) training aimed at curbing workplace discrimination and harassment.

Notably, the IFA does not prohibit “discussion of the concepts listed therein as part of a course of training or instruction” if the “training or instruction is given in an objective manner without the endorsement of the concepts.” As a result, employers have been left in an untenable position where any given workplace training–such as the training mandated under federal anti-discrimination laws–might or might not violate the statute based on the subjective analysis of an aggrieved employee.

On August 19, 2022, a federal district court ruled the Individual Freedom Act unconstitutional. The court held that the statute is a “naked viewpoint-based regulation on speech,” serving no compelling state interest, in violation of the First Amendment. The court also held the statute was unconstitutionally vague.

The First Amendment prohibits the State from “burden[ing] the speech of others in order to tilt public opinion in a preferred direction.” The court explained that, unlike the prohibited DEI training, the law actively prohibited discussions of certain topics wholesale. “If Florida truly believes we live in a post-racial society, then let it make its case,” the court stated, “[b]ut it cannot win the argument by muzzling its opponents.” This law does not ban “all mandatory training” but rather bans training based on specific viewpoints. “[T]he only way to determine whether the IFA bars a mandatory activity is to look to the viewpoint expressed at that activity – to look at speech.”

The court also found that the language in the statute is impermissibly vague. At least a few of the eight prohibited “concepts” are “mired in obscurity,” “bordering on unintelligible.” Further, “the entire statute was rendered vague by the qualifier that ‘discussion’ of the prohibited concepts is permissible if ‘given in an objective manner without endorsement.’” Because the law gives people no clear indication of permitted vs. prohibited conduct, the law is unconstitutionally vague.

The court ordered that the law cannot be enforced, refusing to issue a stay of the decision pending appeal.

Based in Ocala, Florida, and representing workers throughout Florida, our employment discrimination attorneys in Marion County, Florida have dedicated their practice to fighting for the rights of gender and race discrimination victims. If you have been treated differently from employees of a different race, if you have been subjected to harassment because of your race or gender, or if you have questions about your protection from workplace discrimination under federal or state employment discrimination law, please contact our office for a free consultation with our employment lawyers in Marion County, Florida. Our employee rights law firm takes workplace discrimination cases on a contingency fee basis. This means that there are no attorney’s fees incurred unless there is a recovery and our attorney’s fees come solely from the monetary award that you recover.