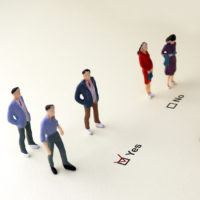 The EEOC is the administrative agency of the United States responsible for interpreting and enforcing federal laws prohibiting discrimination, including gender discrimination. In enforcing the federal anti-discrimination laws, the EEOC is also authorized by federal law to bring lawsuits on behalf of employment discrimination victims, including gender discrimination. In a press release issued by the EEOC regarding the case, a Regional Attorney for the EEOC’s Miami District Office, Robert E. Weisberg, stated that “[a]ll employees are entitled to the freedom to compete for promotions on a fair and level playing field without regard to whether they are male or female.” “Employers must make promotion decisions based on qualifications and experience,” Mr. Weisberg added, “and not on misguided unlawful gender-based stereotypes.” In commenting on the case, the Director for the EEOC’s Miami District Office, Michael Farrell, stated that the “EEOC has long been dedicated to eradicating the glass ceiling for women in all professions and, with this case, continues to ensure that women will be afforded the same promotional opportunities as men.”