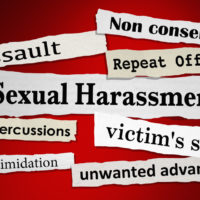 Under Title VII of the Civil Rights Act of 1964 (Title VII), an employer’s liability for sexual harassment depends on whether the harasser is the victim’s supervisor or merely a co-employee. In Faragher v. City of Boca Raton, 524 U.S. 775 (1998) and Burlington Indus., Inc. v. Ellerth, 524 U.S. 742 (1998), the U.S. Supreme Court set forth the standards for employer liability for a supervisor’s sexually harassing conduct. Under Faragher/Ellerth, an employer is strictly or automatically liable for sexually harassing conduct by a supervisor which culminates in the taking of a tangible employment action against the victim, such as a discharge, demotion, or reduction in hours. When the supervisor’s sexual harassment does not culminate in the taking of a tangible employment action against the victim, an employer is permitted to assert an affirmative defense to liability for supervisor hostile work environment sexual harassment. When an employer is entitled to assert the affirmative defense, commonly referred to as the Faragher/Ellerth affirmative defense, the employer bears the burden of proving the affirmative defense.

A recent decision by the U.S. District Court for the Middle District of Florida in Charest v. Sunny-Aakash, LLC, No. 16-2048 (M.D. Fla. Sept. 9, 2017) illustrates the application of the alter ego theory of liability. In that case, Ruth Charest (Charest) and Jennifer Kufrin (Kufrin) brought sexual harassment claims under Title VII against their former employer, Sunny-Aakash, LLC (Sunny-Aakash). Sunny-Aakash owns and operates a Holiday Inn Express Hotel. Charest and Kufrin claimed that they were sexually harassed by the owner of Sunny-Aakash. The owner of Sunny-Aakash was also the general manager of the Holiday Inn where Charest and Kufrin worked.

During her employment with Sunny-Aakash, Charest worked in the hotel’s housekeeping department. As the hotel’s general manager, the owner was Charest’s supervisor. Charest claimed that throughout her three years of employment with Sunny-Aakash, the owner threatened her by declaring that if she did not give him oral sex and have sexual intercourse with him, she would lose everything—her job, her family, her husband—and she would be sent back to the Philippines. According to Charest, the owner forced her to perform oral sex and engage in sexual intercourse throughout her employment. Although Charest told the owner no and tried to reject his sexual demands, she performed the sexual acts because the owner would threaten to fire her if she resisted his sexual demands. After the alleged sexual encounters, the owner would threaten Charest by telling her she would be in “big trouble” if she reported his behavior. In May 2016, Charest refused the owner’s demand for oral sex. When she refused, the owner began yelling at her and Charest slapped the owner’s face. The owner then fired Charest.

During her employment with Sunny-Aakash, Kufrin worked at the hotel’s breakfast bar. As the hotel’s general manager, the owner was also Kufrin’s supervisor. Kufrin also claimed that the owner forced her to perform oral sex and engage in sexual intercourse throughout her employment. Kufrin alleged that when she would reject his sexual demands, the owner would threaten her with termination. Kufrin asserted that when she submitted to his sexual demands, the owner would give her extra hours and promotions. According to Kufrin, she could not complain to anyone because there was “nobody to go to” as the owner was the only manager and supervisor. Kufrin further alleged that the owner began demanding that Kufrin have sex with him and his friends. Kufrin refused these demands and told the owner what he was doing was illegal. In May 2016, Kufrin refused the owner’s demand for oral sex. The owner then fired Kufrin.

Sunny-Aakash filed a motion with the trial court seeking dismissal of Charest’s and Kufrin’s sexual harassment claims. Sunny-Aakash argued that it was not liable for the owner’s sexually harassing behavior because it was entitled to assert and could prove the Faragher/Ellerth affirmative defense to liability for supervisor harassment. The trial court denied Sunny-Aakash’s motion for dismissal.