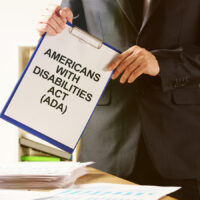 Having litigated employment discrimination cases for more than two decades, our Alachua County, Florida employment discrimination lawyers know that employers often manipulate facts in an attempt to immunize themselves from liability under the federal anti-discrimination laws. Employers not only have the incentive to manipulate facts in the employment discrimination context, they are rewarded when they do so because the federal courts have imposed a broad array of evidentiary requirements on employment discrimination victims that require them to prove an employer’s knowledge at a relevant point in time as a condition of imposing liability on employers. Recognizing that information regarding what they know and when they knew it is generally under their unilateral control, employers simply manufacture factual defenses for the purpose of attempting to demonstrate that they were without the requisite knowledge at the relevant point in time.
An evidentiary requirement under the Americans with Disabilities Act (ADA) is illustrative of these principles. The ADA prohibits employers from discriminating against job applicants and employees on the basis of disability. In order to prove a discriminatory discharge claim under the ADA, an employee is required to prove that the employer had knowledge of his or her disability when the termination decision was made. In creating this evidentiary requirement, the federal courts reason that absent evidence the employer knew of the employee’s disability when the termination decision was made, an employer could not have fired the employee on the basis of disability because the employer did not know of the disability. In this article, our Gainesville, Florida employment discrimination attorneys explain how the facts alleged in Baron v. Advanced Asset & Property Management, 2014 WL 1679049 (E.D. N.Y. Apr. 29, 2014) show how employers attempt to exploit the ADA’s knowledge requirement and immunize themselves from liability under the ADA.

In that case, David Baron (Baron) brought an employment discrimination lawsuit against his former employer, Advanced Asset and Property Management (Advanced Asset), pursuant to the ADA. Baron claims that Advanced Asset fired him because of his disability in violation of the ADA.
In March 2009, Advanced Asset, a property management company, hired Baron as an Assistant Controller for its office in Uniondale, New York. In 2009, Baron developed severe aortic regurgitation, caused by aortic valve leaking resulting in an insufficient volume of blood ejected through the aortic valve. About five or six seeks before he was fired, Baron was advised by his doctor that he needed to undergo open heart surgery and a valve replacement. Baron maintains that his heart condition, which substantially limits his circulatory system in comparison to that of a normal individual, constitutes a disability within the meaning of the ADA.

Advanced Asset claims that as a result of Baron’s poor performance, it hired a woman named Vicente to replace Baron. Advanced Asset claims that discussions regarding Baron’s termination began prior to June 25, 2009, the date it placed an advertisement that resulted in Vicente’s hire, and before Advanced Asset was aware of Baron’s heart condition. According to Advanced Asset, Baron never informed anyone at Advanced Asset about his heart condition other than his supervisor, Zerbo, and that was not until after June 25, 2009. Thus, according to Advanced Asset, it “decided to terminate [Baron] in June 2009 for performance reasons and before it knew of [Baron’s] need for surgery.
Baron maintains that Vincent was not hired to replace him. Baron pointed out that Vicente’s hiring form, which was generated when Advanced Asset hired Vicente, stated that Vicente was “an addition to staff,” and that she was given the title of Senior Property Accountant as opposed to Baron’s title of Assistant Controller. Baron further argued that the decision to fire him was made after Advanced Asset hired Vicente and after Advanced Asset became aware of his heart condition. In particular, Baron claims that he had conversations with his supervisor, Zerbo, regarding his heart condition, and that he told Zerbo about the need for heart surgery approximately five to six weeks prior to his termination. In addition, Baron alleges that, on one occasion, Zerbo told him that he would be reporting to Vicente, and when Baron asked Zerbo if he was going to be fired, Zerbo replied, “you’re sick and this is a business decision.”
Advanced Asset alleged that Vicente started work with the company on August 9, 2009, and although at that time Baron was still an employee, Vicente was to transition into Baron’s position. According to Advanced Asset, however, it decided to end the transition period and fire Baron because he signed, without authorization, twenty checks totaling over $40,000 on September 14, 2009.