Is A Transitory But Non-Minor Health Condition A Disability Under Americans With Disabilities Act? 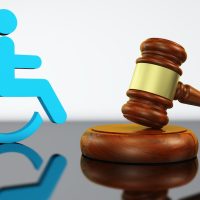 The ADA prohibits employers from discriminating against employees on the basis of disability. For purposes of the ADA, an employee is disabled if he or she: (1) has a physical or mental impairment that substantially limits one or more major life activity; (2) has a record of such an impairment, or (3) is regarded as having such an impairment. The ADA defines physical impairment as including “any physiological disorder or condition, cosmetic disfigurement, or anatomical loss affecting one or more body systems.”

As observed by the court in Williams v. Phila. Hous. Auth. Police Dep’t,  380 F.3d 751 (3d Cir. 2004), the ADA includes “regarded as” claims because being perceived as disabled “may prove just as disabling” to a person as another type of physical or mental impairment. In most cases, as observed by the court in Ross v. Kraft Foods N. Am., Inc., 347 F.Supp.2d 200, 204 (E.D. Pa. 2004), “an employer regards a person as disabled when it “misinterpret[s] information about an employee’s limitations to conclude that the employee is incapable of performing” his or her job duties.

In July 2013, Eshleman began working for Patrick Industries as a truck driver. Between October 14, 2015, and December 14, 2015, Eshleman took medical leave to undergo surgery to remove a nodule from his left lung. He told his supervisor that the nodule had to be removed and tested for cancer. After two months of medical leave, Eshleman returned to work in his full capacity, without restrictions. However, about six weeks later, Eshleman suffered a severe respiratory infection lasting from January 27, 2016, until January 31, 2016. With his doctor’s approval, Eshleman returned to work in his full capacity on February 1, 2016. At the end of his shift on his second day back, Patrick Industries fired him.

Eshleman claims that the real reason for his termination was that he was regarded as disabled in violation of the ADA. According to Eshleman, Patrick Industries fired him because it “perceived that he suffered from a long-term or chronic medical condition which would affect his attendance in the future, as it had in the immediate past, due to what [it] perceived as continuing medical issues.”

The trial court dismissed Eshleman’s wrongful termination claim and held that Eshleman was not protected by the “regarded as” disabled prong of the ADA because his impairment lasted less than six months and was, therefore “transitory and minor.” On appeal, Eshleman conceded that his actual impairments—surgery to remove a nodule from his lung and a severe upper respiratory infection—were transitory because they lasted less than six months. However, Eshleman contended the trial court was nonetheless required to separately evaluate whether his impairment was “minor” for purposes of the ”transitory and minor” defense.

Condition Must Be Both Transitory & Minor

The Third Circuit agreed with Eshleman and reversed the trial court’s dismissal of Eshleman’s wrongful termination claim. In doing so, the appellate court ruled that the trial court improperly failed to conduct an “independent analysis into whether Eshleman’s impairment was minor, apart from whether it was transitory.” In other words, the Third Circuit determined that whether an impairment is “minor” is “a separate and distinct inquiry” from whether the impairment is “transitory” under the “regarded as” disabled prong of the ADA.

In applying these principles, the Third Circuit found that the trial court improperly “conflated ‘transitory’ and ‘minor’ by mechanically applying the six-month limitation for ‘transitory’ claims to the definition of ‘minor.’ ” In other words, instead of “considering whether Eshleman’s impairment was minor separately from whether it was transitory,” the trial court improperly ruled that because Eshleman’s impairment was transitory because it lasted less than six months, Eshleman’s condition was also minor.” Because “even minimally invasive lung surgery is still thoracic surgery,” the appellate court reasoned, “it is plausible that Eshleman’s lung surgery was non-minor,” even if transitory.

The Third Circuit also noted that Eshleman does not allege that Patrick Industries “understood his impairment to be anything other than a one-time surgery.” Rather, Eshleman’s complaint “contains plausible allegations that Patrick Industries regarding his series of recent medically-related absences as signs of a continuing medical condition that essentially rendered him damaged goods and therefore unemployable.” Thus, the trial court also improperly “failed to evaluate whether Eshleman’s perceived chronic medical condition, distinct from his lunger surgery, was objectively transitory and minor.”

Consequently, the Third Circuit concluded that “Eshleman’s allegations, which are premised not only on the lung surgery but also a close-in time subsequent ailment affecting the same system of the body, plausibly plead a non-minor perceived impairment.”