Is An Employee Protected From Racial Harassment By Employees Who Are Members Of The Employee’s Race? 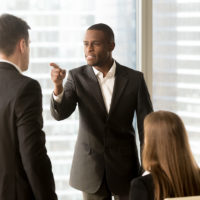 Ignoring U.S. Supreme Court precedent, employers seek to perpetuate the myth by arguing that a hostile work environment harassment claim is precluded as a matter of law when an employee is harassed by employees who are members of the employee’s race. In Castandea v. Partida, 430 U.S. 482 (1977), the Supreme Court explained that “because of the many facets of human motivation, it would be unwise to presume as a matter of law that human beings of one definable group will not discriminate against other members of their group.” The decision by the U.S. Eighth Circuit Court of Appeals in Ross v. Douglas County, Nebraska, 234 F.3d 391 (8th Cir. 2000) demonstrates that a racial hostile work environment harassment claim is not precluded simply because the victim and the harasser are members of the same race.

In that case, Odis Ross (Ross) brought a racial harassment claim against his former employer, Douglas County, Nebraska (Douglas County), pursuant to Title VII. Ross, who is African-American, worked at the Douglas County Correctional Facility. Johnson, who is also African-American, was Ross’ supervisor. Shortly after becoming his supervisor, Johnson began subjecting Ross to racial slurs. Ross protested and asked that he be addressed as Officer Ross. Ross ultimately filed a grievance against Johnson. Ross’ grievance did not resolve the situation and Johnson continued to subject Ross to racial slurs.

Because of the racial harassment, Ross decided to resign and submitted a letter of resignation to the Chief Warden of the facility, McPhillips. The next month, Ross decided that he did not want to resign and submitted a letter to another supervisor withdrawing his resignation. McPhillips told Ross that he could not withdraw his resignation and would have to re-apply. Undeterred, Ross reported to work and was informed that he was no longer on the schedule. The Administrative Assistant for Inmate Services, Marr, complained to McPhillips that Ross should be allowed to withdraw his resignation as other white officers had been allowed to do in the past. McPhillips told Marr that “Ross was a ‘black radical,’ and if he would allow him to come back, all he’s going to do is stir up the black officers.” Ross was never allowed to return to work.

Employee Harassed Because Of His Race

Following a trial, the jury returned a verdict in favor of Ross on his racial hostile work environment harassment claim. On appeal, Douglas County argued that Ross’ racial harassment claim failed as a matter of law because Ross could not prove that he was harassed because of his race since Johnson is also African-American. The Eighth Circuit rejected Douglas County’s argument and upheld the jury’s verdict in favor of Ross. The appellate court explained that Ross was harassed on the basis of race because the racial slurs, including “black boy,” Ross endured “would not be used against a white person—such use would make little sense.” Indeed, “the only reason Johnson subjected Ross to racial slurs,” the court of appeals pointed out, “was because of Ross’ race.” Because “the only reason” Ross was subjected to racial slurs was because he is African-American, the Eighth Circuit concluded, the fact that Johnson is also African-American “does not alter this.”

Based in Ocala, Florida and representing employees throughout Central Florida, our Alachua County, Florida hostile work environment harassment attorneys have nearly two decades of experience representing employees who have been the victim of racial harassment in the workplace. If you have been subjected to racial harassment at work or have questions about racially abusive behavior in the workplace, please contact our office for a free consultation with our Alachua County, Florida hostile work environment harassment lawyers. Our employee rights law firm takes employment discrimination and harassment cases on a contingency fee basis. This means that there are no attorney’s fees incurred unless there is a recovery and our attorney’s fees come solely from the monetary award that you recover.