Is An Employer’s Preselection Of A Job Candidate Evidence Of Discriminatory Employment Decision? 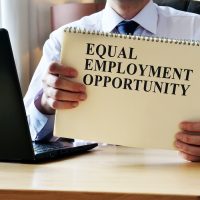 In November 2015, an external applicant, a twenty-eight-year-old woman named Hampton, applied to DPS for the position of Deputy Superintendent of Talent. On November 30, 2015, a few weeks after Hampton initially applied, an agent of DPS, Denton-Brown, sent an email in which he, among other things, asked DPS employees where Hampton’s status stood. Denton-Brown mentioned, “Ideally she would interview for [the Deputy Superintendent of Talent] and, if strong but not quite qualified for that position . . . , she would be offered the [EDTA] position.” Saying that Hampton “would be offered” the EDTA job implies that she was preselected for the position.

On December 3, 2015, a DPS employee, Henderson, sent an email to another DPS employee, Earley, saying: “[Hampton] has a competing offer she needs to respond to, so if you think she is the right fit we will potentially have to keep her interested for a couple of weeks or find an alternative solution to bring her on board quickly.” Another email from a DPS employee, Green, states: “Ealey would like to move [Hampton] through the application/hiring process for the ED Talent position. Obviously, we’d like to start and conclude the process as quickly as possible.”

Preselection Is Evidence Of Discrimination

The trial court dismissed Stokes’ employment discrimination lawsuit. On appeal, the U.S. Sixth Circuit Court of Appeals reversed the trial court’s decision and reinstated Stokes’ case. At the outset of its opinion, the appellate court explained that “preselection is relevant evidence of an employer’s motivation” and it “operates to discredit the employer’s proffered explanation for its employment decision.” Applying this principle, the court of appeals determined that Stokes’ evidence that DPS preselected Hampton for the EDTA role and planned to offer Hampton the position before the interview refuted DPS’s claim that the “poor scores from Stokes’ interview motivated the decision not to . . . promote him because the preselection occurred before the interview.” Thus, the Sixth Circuit concluded that a jury could find that the “interview scores were not the reason DPS did not pick Stokes for the EDTA role, because DPS selected Hampton weeks before, and that Stokes’ age or gender was the real reason for the decision not to promote him.