Is Failing To Get A Fired Employee’s Version Of Events Evidence Of A Discriminatory Discharge? 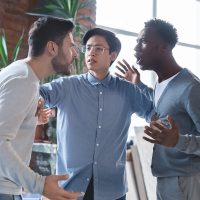 In that case, a man named Smothers brought an employment discrimination lawsuit against his former employer, Solvay Chemicals, Inc. (Solvay), pursuant to the Americans with Disabilities Act (ADA). Solvay claims that Smothers was fired because of a safety violation and a dispute with a co-worker. Smothers claims his disability was the real reason for his termination.

From 1990 until he was fired in August 2008, Smothers worked as a surface maintenance mechanic in Solvay’s trona mine in Wyoming. Smothers contends that he has a disability within the meaning of the ADA based on a degenerative disc disease in his spine. His medical condition required three surgeries on his neck between 1999 and 2004, as well as numerous other medical procedures. Smothers sought and was granted leave under the Family Medical Leave Act (FMLA) for intermittent absences caused by this condition. Managers and co-workers, according to Smothers, complained about his FMLA-protected absences. Smothers claims that a Production Superintendent pressured him to change from his graveyard shift to a day shift where a larger staff could more easily absorb his absence without requiring the company to incur overtime costs.

On August 19, 2008, there was a rupture in a line in an acid tank at the mine. The rupture caused hydrochloric acid to “spray out” into the surrounding area. Smothers approached the acid tank and saw that a damaged spool piece caused the problem. Smothers prepared to remove the spool piece when another employee, a man named Mahaffey, told Smothers that he should wait for a line break permit to avoid breaking Solvay’s safety policy. Smothers disagreed, saying the line break permit was not required because the line was already broken.

Smothers then removed the broken spool piece and took it to the maintenance shop to repair it. Although this did not necessarily violate Solvay’s break line policy, Smothers conceded that removing the spool piece before obtaining a break line permit was still a violation of Solvay’s safety policies.

Mahaffey then went to the maintenance shop and offered to assist, but Smothers refused his help. Mahaffey accused Smothers of hypocrisy because Smothers had previously reported other employees for safety violations. According to Solvay, Smothers also told Mahaffey, “I don’t want your help” and said he was going to the bathroom and “wanted to know if Mahaffey wanted to watch him to see if he did that right.” Smothers described the interaction differently, asserting that Mahaffey provoked the argument and began yelling and ranting at him. Other witnesses in the maintenance shop at the time characterized the interaction as Smothers and Mahaffey “arguing.”

Worker Never Asked For His Side Of Story

The next day, Mahaffey lodged a verbal complaint regarding Smothers’ behavior. Later that day, three managers called Smothers into a meeting. During the meeting, Smothers tried to explain his version of the exchange with Mahaffey, but one of the managers stopped him and said the managers were not interested in hearing about the argument. Instead, they discussed Smothers’ alleged safety violation. Smothers was then sent home pending an investigation.

While Smothers was effectively suspended, Solvay continued its investigation. One of the managers visited Mahaffey’s home to obtain a more detailed statement of Mahaffey’s version of the quarrel. The manager did not make a similar effort to contact Smothers for a more detailed statement of his version of events. During this time, Smothers sent two emails to Solvay managers saying he was “very worried that Solvay was going to use this incident as a reason to terminate my employment due to the amount of time I have missed due to my disability.”

On August 27, 2008, Solvay told Smothers he was fired, the product of a group decision by six managers (collectively, the decision-making group). Before making their final decision, at least three of the managers personally talked with Mahaffey about his argument with Smothers. No one from the decision-making group spoke with Smothers about his version of the argument. Five of the six managers testified that the argument with Mahaffey weighed heavily in the group’s decision to fire Smothers. Two managers also testified that the group relied heavily on Mahaffey’s allegations—including Mahaffey’s characterizations of Smothers’ behavior—in deciding what discipline was appropriate.

Termination Based On One-Sided Information

The Tenth Circuit pointed out that managers in the decision-making group said Smothers was fired because his quarrel with Mahaffey showed he had been “defiant,” “hostile,” and “aggressive.” But, the court of appeals observed, “Smothers emphatically disputes these characterizations, and the same managers acknowledge their beliefs were based almost entirely on Mahaffey’s version of events.” The appellate court also noted that three managers personally spoke with Mahaffey to hear his allegations regarding Smothers’ behavior, but none heard Smothers’ version of the encounter. Moreover, during the only meeting that Smothers had with any decision-maker, the manager even refused to allow him to talk about the quarrel. Thus, the decision-making group “ultimately relied on one-sided information and accepted Mahaffey’s allegations and negative characterizations of Smothers’ behavior.

Based on this evidence, the Tenth Circuit determined that “a reasonable jury could find that Solvay’s “investigation into the quarrel between Smothers and Mahaffey was not fair or adequate.” “The inadequate investigation,” the Tenth Circuit explained, would also allow a reasonable jury to conclude that “Solvay’s purported reason for firing Smothers was [a] pretext” for unlawful disability discrimination.