Is Failing To Provide An Employee With An Accommodation Evidence Of Disability Discrimination? 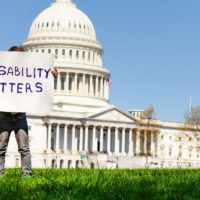 The Americans With Disabilities Act (ADA) was enacted to eradicate discrimination against employees with disabilities and to ensure equal treatment for employees with disabilities. As explained by the U.S. Third Circuit Court of Appeals in Taylor v. Phoenixville School District, 174 F.3d 142 (3d Cir. 1999), “[d]iscrimination under the ADA encompasses not only adverse actions motivated by prejudice and fear of disabilities, but also includes failing to make reasonable accommodations of disabilities.” Indeed, the ADA defines “discrimination” to include an employer’s failure to reasonably accommodate a disabled employee.

Having extensive experience representing employees needing an accommodation for their disability, our Alachua County, Florida disability discrimination lawyers have learned that employers often resist employees’ requests for assistance for their disability and refuse to make reasonable efforts to determine the appropriate accommodation. Indeed, many employers offer nothing and refuse to even discuss what accommodations they might allow. The recent decision by the U.S. Sixth Circuit Court of Appeals in Atkins v. Dolgencorp, LLC, No. 17-6278 (6th Cir. Aug. 7, 2018) is instructive in showing that an employer’s failure to accommodate an employee’s disability and refusal to engage in the interactive process is evidence of disability discrimination.

When Atkins experienced low blood sugar episodes at work, she generally went to the break room where she kept orange juice in the cooler. However, when she worked alone at the cash register, Atkins could not retreat to the back room. As a result, Atkins asked the store manager if she could keep orange juice at her cash register in case of an emergency. The store manager told her that store policy prohibited it.

In late 2011 and early 2012, Atkins suffered two low blood sugar episodes while working alone. Each time Atkins responded by drinking orange juice from the checkout cooler, paying for it immediately after the episode, and reporting the incident to the store manager. In March 2012, Dollar General concluded that these two events violated its “grazing policy,” which forbids employees from consuming merchandise in the store before paying for it. As a result of her purported violation of the “grazing policy,” Dollar General fired Atkins.

Following a trial, the jury returned a verdict for Atkins on her disability discrimination claims. On appeal, Dollar General argued that the jury’s verdict must be reversed and judgment entered in its favor for two reasons. First, Dollar General claimed that it had no duty to accommodate Atkins because her nurse testified that Atkins could treat low blood sugar episodes in ways other than drinking orange juice, including glucose pills, honey, and candy. Second, Dollar General claimed that Atkins failed to produce evidence that other non-disabled employees who violated the “grazing policy” were not discharged and, thus, were treated more favorably than Atkins. The Sixth Circuit rejected Dollar General’s arguments and upheld the jury verdict in favor of Atkins.

Turning to Dollar General’s first argument, the Sixth Circuit explained that once Atkins requested a reasonable accommodation, “the employer had a duty to explore the nature of the employee’s limitations, if and how these limitations affected her work, and what types of accommodations could be made.” “Had Dollar General followed this route,” the appellate court observed, “it might well have told Atkins that she could consume glucose pills at the register and perhaps that would have resolved the matter.” However, the court of appeals pointed out, “that’s not what it did.” Instead of making reasonable efforts to explore possible accommodations with Atkins in compliance with the ADA, the “store manager categorially denied Atkins’ request, failed to explore any alternatives, and never relayed the matter to a superior.” “That was Dollar General’s problem,” the Sixth Circuit concluded, and “not Akins’ ” problem.

Failure To Accommodate Is Evidence Of Discrimination

The Sixth Circuit further found that Dollar General could not use the “grazing policy” to justify Atkins’ termination because Dollar General’s failure to accommodate Atkins’ disability lead to her violation of that policy and resulting termination. Dollar General could not use its “grazing policy” as a shield against discrimination because the “failure to consider the possibility of reasonable accommodation for known disabilities, if it leads to discharge . . . amounts to a discharge solely because of the disabilities.” Applying this principle to the facts, the appellate court observed that “Atkins would never have had reason to buy the store’s orange juice during a medical emergency if Dollar General had allowed her to keep her own orange juice at the register or worked with her to find another solution.” Thus, the Sixth Circuit concluded, Dollar General could not “illegitimately deny” Atkins a reasonable accommodation to the “grazing policy” and “use that same policy” as the basis for firing her.