Is Staring At A Woman’s Breasts In The Workplace An Act Of Sexual Harassment? 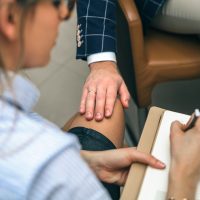 Hall has worked for the City since 1997, and as of July 2021, continues to do so. In 2017, a man named Connolly, a building inspector for the City, became Hall’s supervisor. After becoming her supervisor, Hall claims that Connolly started harassing her on a daily basis. Hall alleges that Connolly made “daily comments” about her cross neckless as an excuse to stare at her breasts. On one occasion, according to Hall, Connolly asked Hall whether she was having a “going-away party” for her breasts after she told Connolly that she needed to have breast-reduction surgery.

Hall made her first sexual harassment complaint to the City on November 8, 2018. The day after the 2018 Congressional and state elections, Connolly told Hall that he heard she was working the “poles,” specifically spelling out “poles” to imply that Hall was working as a stripper. Hall complained about this comment to the City’s Human Resources Department (HR Department). Hall also complained that Connolly would make comments about her cross and stare at her breasts. Shortly after her complaint on November 8, 2018, Hall had another issue with Connelly’s behavior. On November 15, 2018, Hall was sitting in her cubicle while Connolly and another employee were having a conversation about a new program in an open area nearby. During that conversation, Hall heard and saw Connolly make a masturbation motion. Hall reported Connolly’s harassment to the union, and the union forwarded the complaint to the HR Department.

Victim Told Not To Complain About Harasser

In January 2019, Hall requested to be put on the transfer list to “get away from” Connolly because she “wasn’t comfortable” with Connolly as her supervisor. But twelve days later, Hall advised the HR Department that she was withdrawing her name from the transfer list. Hall states that she withdrew her name from the list because, between her initial request and withdrawal, she became aware that Connolly had written her a “negative” performance review. Nevertheless, the City decided that another employee would be assigned as Hall’s supervisor.

But Hall claims that Connolly’s harassment did not stop. A few days after the City assigned Hall a new supervisor, Hall reported Connolly to the HR Department for a third time. Hall alleges that Connolly asked her whether she had candles and blankets in her car in a way that suggested he was asking whether she had “romantic” things in her car for an “escapade.” Hall also alleges that Connolly asked her, “did your husband’s pipes freeze?” Hall maintains that the HR Department told her “they were not going to take these incidents seriously” and to “not come back again with anything regarding [Connolly] because it could be construed as you starting to harass him.” Hall claims that Connolly’s harassment did not stop after her January 2019 complaint to the HR Department, but she stopped reporting the behavior because of the HR Department’s response to her last complaint.

The City filed a motion with the trial court seeking dismissal of Hall’s sexual harassment claim. In support of its motion for dismissal, the City argued that the alleged sexual harassment Hall experienced was not sufficiently pervasive to create a hostile working environment in violation of Title VII. The trial court denied the City’s motion for dismissal and ruled that “a reasonable jury could [ ] find that Hall was subjected to pervasive harassment” in violation of Title VII.

In denying the City’s motion for dismissal, the trial court focused on Connelly’s alleged staring at Hall’s breasts. The trial court pointed out that Hall testified that Connolly made “daily” comments about her cross necklace “anytime he saw” her as an excuse to stare at her breasts. “Hall’s assertion,” the trial court concluded, “that this harassment took place every day starting in 2017 is sufficient to establish” that Hall worked in a sexually hostile environment in violation of Title VII. Thus, the trial court determined that Hall was entitled to proceed to a jury trial on her sexual harassment claim against the City.

Based in Ocala, Florida and representing workers throughout Florida, our hostile work environment attorneys in Marion County, Florida have litigated sexual harassment cases in Florida courts for more than twenty years. If you have been sexually harassed at work or have questions about your protection against sexual harassment under federal employment discrimination law, please contact our office for a free consultation with our hostile work environment lawyers in Marion County, Florida. Our employee rights law firm takes sexual harassment cases on a contingency fee basis. This means that there are no attorney’s fees incurred unless there is a recovery and our attorney’s fees come solely from the monetary award that you recover.