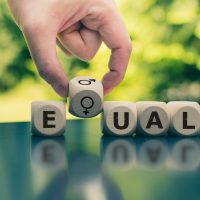 In that case, a woman named Smith brought a sex discrimination claim against Siskin Steel & Supply Company, Inc. (Siskin), pursuant to Title VII of the Civil Rights Act of 1964 (Title VII). Under Title VII, employers are forbidden from discriminating against employees on the basis of sex. Smith claims that Siskin violated Title VII by failing to hire her because she is a woman.

Siskin is a steel processing and distributing company. In January 2020, Siskin posted an internal job-opening notice for the position of Flame Burner operator on the third-shift. No current employees signed up for the position. That same month, Smith learned about the position from an employee at Siskin, Stephens. Stephens put Smith in touch with the Assistant Operations Manager, a man named McAllister, regarding her interest in the position. Smith and McAllister had a phone call on January 16, 2020 to set up an in-person interview. They arranged to meet the next day.

As planned, McAllister and Stephens met with Smith, and they showed her how the Flame Burner worked. Then, they went to human resources so that Smith could fill out an application. McAllister said that the opening would be for third shift, and he considered this interaction Smith’s interview. During her tour of the plant, Smith saw only one female employee and she worked in the offices, not the warehouse or production area. No women worked in the other areas she saw.

On January 28, 2020, McAllister called Smith and told her that she could have the third-shift Flame Burner job. Smith understood this to be a job offer. Smith asked for some time to speak with her wife. The next day, Smith left McAllister a voice mail stating something like, “I’m just calling to let you know that we decided third-shift wouldn’t be so bad. Give me a call and let’s see where we go from here.” McAllister claims to have not heard this voicemail until April 2020.

Although McAllister offered Smith the job on January 28, 2020, the Vice President of Operations, Hammond, claims to have changed his mind about hiring a third-shift Flamer Burner. Hammond asserts that between January 15 and January 30, he told McAllister to hold off on hiring a Flamer Burner. Then on January 30, 2020, there was a meeting to discuss the Flame-Burner position. In this meeting, according to Hammond, Hammond told McAllister that a third-shift Flame Burner operator was needed, and they would stick to what they had, a first and second shift.

During her deposition, Smith shed light on why her job offer was revoked. Smith testified that Stephens told her that McAllister said “one of the supervisors didn’t think [McAllister] was serious about hiring a woman.” Smith further testified that Stephens told her that McAllister “said there was going to be a problem because they didn’t know where [Smith] was going to go to the bathroom.” During his deposition, Stephens testified that he probably had a conversation with McAllister about where Smith would go to the bathroom because he did not “personally know where she would go” as all of the restrooms in the production area were used by men.

Evidence Of Discriminatory Failure To Hire

First, the trial court found the alleged remarks by McAllister that “one of the supervisors didn’t think [McAllister] was serious about hiring a woman,” and that “there was going to be a problem because they didn’t know where [Smith] was going to go to the bathroom,” constituted direct evidence that Smith was not hired because she is a woman. Second, the trial court pointed out Siskin proffered different reasons at different times for not hiring Smith. “One of which was provided to the EEOC and one of which is provided to this Court.” The trial court explained that it ”cannot decide which story is true, only a jury can.” Along with those two reasons, the trial court noted, McAllister told Smith “a third reason, that she was not hired because four current employees signed up for the position overnight.” Because Siskin proffered different reasons at different times for not hiring Smith, the trial court determined, a reasonable jury could find that the proffered reasons were a pretext for sex discrimination and Smith’s gender was the real reason she was not hired.