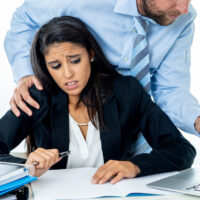 NLBI is a health care training facility which provides training to individuals in medical billing and becoming medical assistants. Flynn is the president of NLBI. Flynn met Lashley at a club in Queens, New York. This encounter led to both a romantic relationship, which lasted for several months, and Lashley’s employment at NLBI as an admissions recruiter. While Lashley was still employed at NLBI, he attempted to break up with Flynn. In response, Flynn became angry, sending Lashley a flurry of text messages, including one stating that “you should quit, it is not going to be nice” after Lashley refused to go to Flynn’s house to have sex with her.

After he refused to quit, Lashley was terminated from NLBI. Lashley was told that he was fired because of “a problem with one of his guys, his worker’s pay, and [Lashley] went in defense of him because he didn’t get all of his money,” and therefore Lashley was “not on [Flynn’s] side.” However, Lashley testified that Flynn told him that the true reason he was fired was because he did not want to sleep with her anymore. Following a four-day jury trial, the jury returned a verdict in favor of Lashley for $10,000 in compensatory damages and $30,000 in punitive damages.

Following the jury’s verdict, NLBI filed a motion with the trial court claiming that Lashley’s quid pro quo sexual harassment failed as a matter of law and the trial court should have dismissed the claim before sending the case to the jury. In support of its position, NLBI maintained that because Lashley and Flynn had a consensual relationship, Lashley could not become the victim of quid pro quo sexual harassment after the termination of the relationship. The trial court denied NLBI’s motion and upheld the jury’s verdict in favor of Lashley.

In denying NLBI’s motion, the trial court determined that Flynn’s retaliation against Lashley for his refusal to “resume sexual relations with her fits into the quid pro quo model of sexual harassment.” The trial court pointed out that Lashley “repeatedly tried to break up” with Flynn, but she kept attempting to get back together with Lashley, even telling him that she would “provide for him,” “pay his child support,” and buy him “an all new white Range Rover.” The trial court also observed that after Lashley told Flynn that he wanted to end their romantic relationship, Flynn responded in an angry and threatening fashion by telling Lashley that “she was going to make things extremely difficult,” and Flynn “eventually did, by reducing his overtime.” The trial court further observed that Lashley’s testimony that Flynn told him the true reason he was fired was because he did not want to sleep with her anymore established that his rejection of Flynn’s sexual advances was a motivating factor for his termination.