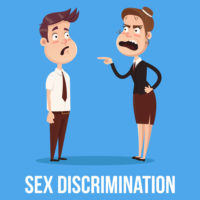 Title VII of the Civil Rights Act of 1964 (Title VII) makes sexual harassment which is sufficiently severe or pervasive to alter the conditions of the victim’s employment and create an abusive work environment unlawful. Having represented sexual harassment victims for almost twenty years, our Central Florida hostile work environment harassment attorneys have learned that employers frequently do not take complaints from men about sexually harassing behavior from women in the workplace seriously. In minimizing, if not ridiculing, complaints from male employees, employers often fail to take remedial action to prevent women from sexually harassing men. The decision by the United States District Court for the Middle District of Pennsylvania in Oberdorf v. Penn Village Facility Operations, LLC, No. 15-1880 (M.D. Penn. March 3, 2017) illustrates that employers are obligated to protect men from sexually harassing behavior from women at work and cannot retaliate against men who make sexual harassment complaints against women.

Male Employee Told To “Suck It Up”

In that case, Ralph Oberdorf (Oberdorf) claimed that his former employers, Penny Village Facility Operations, LLC and Consulate Management Company (collectively Defendants), fired him in retaliation for complaining about sexual harassment. Oberdorf was employed by the Defendants as a licensed practical nurse. The facility where Oberdorf worked was a predominately female-staffed nursing facility. Oberdorf alleged that he was subjected to discriminatory harassment on the basis of gender by his female supervisor. The alleged sex-based harassing behavior towards Oberdorf included remarks that he must be gay because he is a male nurse, comments about his buttocks, and remarks about his girlfriend giving him lap dances. Oberdorf asserted that the supervisor’s comments were made repeatedly over the course of a year.

Oberdorf alleged that he complained multiple times to management about the discriminatory harassment. Despite his repeated complaints, according to Oberdorf, management failed to investigate or correct the discriminatory harassment. Instead, Oberdorf claimed, the Administrator of the facility where he worked told him to “suck it up” and “put on your big boy pants.” Oberdorf was fired about one week after his last complaint of sex-based discriminatory harassment. As justification for the discharge, the Defendants gave Oberdorf a vague explanation about an alleged altercation he had with a patient. In support of his retaliation claim, Oberdorf alleged that although female nurse failed to give the patient medication, she was not fired for this conduct.

Comments Reflect A Pattern Of Antagonism