Must A Customer’s Stalking Involve Physical Touching To Create A Hostile Work Environment? 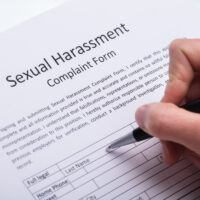 However, as the U.S. Seventh Circuit Court of Appeals observed in Equal Employment Opportunity Commission v. Costco Wholesale Corp., 903 F.3d 618 (7th Cir. 2018), actionable sexual harassment “need not consist” of physical or sexual touching. To establish a sexual harassment claim, a victim must show that she was subjected to sex-based harassment that was sufficiently severe or pervasive to alter the conditions of employment and create a hostile work environment. Thus, sexually harassing behavior need not be both severe and pervasive to create an actionable hostile work environment. Rather, one or the other will do. Consequently, although courts consider physical or sexual touching to be “severe” sexual harassment, severity is not required if the sexually harassing behavior is pervasive.

In this article, our Citrus County, Florida sexual harassment lawyers explain how the recent decision by the U.S. Ninth Circuit Court of Appeals in Christian v. Umpqua Bank, Case No. 18-35522 (9th Cir. Dec. 31, 2020) demonstrates that verbal conduct of a sexual nature that is sufficiently pervasive to alter the conditions of the victim’s work environment can, standing alone create an actionable hostile work environment.

In 2009, Christian began working as a universal associate for Umpqua at its branch in Vancouver, Washington. In late 2013, a customer (the customer) asked Christian to open a checking account for him. Shortly thereafter, the customer began visiting the bank and dropping off “small notes” for Christian. The notes stated that Christian was “the most beautiful girl he’d seen” and that the customer “would like to go on a date” with her. When Christian next saw the customer, she told him, “I’m not going to go on a date with you.” He responded, “okay,” and left the bank.

The customer’s behavior, however, continued. In early February 2014, the customer sent Christian a long letter stating that she was “the most beautiful woman he’s ever seen, that she was his dream girl, that they were meant to be together, and that he wanted to be with her.” Christian showed the letter to her manager, Sanseri, and a corporate trainer, Effinger. Around the same time, Christian learned from employees at another Umpqua branch that the customer had been in the branch several times and asked employees how he could get a date with Christian.

Afterward, Christian informed a regional manager of the situation. The regional manager told her, “Don’t worry. This is an easy fix. We can close his account in 20 minutes . . . We can get this fixed today so he’s not allowed to come in the bank anymore.” For the next few days, Christian called out sick due to stress and anxiety, and refused to return to work until a no-trespassing order was implemented to bar the customer from visiting the bank. Sanseri instructed Christian to return to work and directed her to “just hide in the break room” if the customer visited the bank.

Shortly thereafter, Christian requested in writing that the bank close the customer’s account and obtain a no-trespassing order against him. Christian also asked to be transferred to a different branch. Umpqua closed the customer’s account and told him not to return to the bank. Umpqua also transferred Christian to another branch. Soon after, Christian resigned her position, stating in an email that she was leaving because “her doctor has decided it is bad for her health to continue working at Umpqua Bank.”

Harasser Does Not Have To Touch Victim

The trial court dismissed Christian’s sexual harassment claim. In doing so, the trial court repeatedly emphasized that the customer’s sexually harassing behavior did not create a hostile work environment because the customer “did not attempt to touch [Christian].” In revering the trial court’s dismissal and reinstating Christian’s sexual harassment claim, the Ninth Circuit explained that sexual harassment “need not involve physical or sexual touching in order to be actionable under Title VII.” Taking all of the customer’s acts of harassment together, the Ninth Circuit determined that a reasonable jury could find that the harassment Christian endured was sufficiently severe or pervasive to alter the conditions of her employment and create a hostile work environment.

In support of its conclusion, the Ninth Circuit reasoned that the customer—a person Christian barely knew—“repeatedly pestered her, asked her on dates, and sent her notes and letters declaring that they were soulmates and were meant to be together.” The appellate court also observed that Christian was “terrorized not only by the customer’s bizarre and erratic behavior in and of itself, but also by its unknown potential to escalate.” Christian’s co-workers, the court of appeals pointed out, “also feared for her safety and repeatedly warned her to be careful.” This evidence, the Ninth Circuit determined, “is more than sufficient” for a jury to find that the harassment created an abusive working environment.