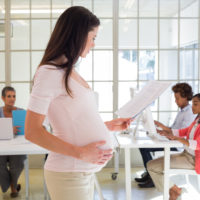 While continuing to work after becoming pregnant, many women will confront circumstances where they are unable to perform the essential functions of their position because of the pregnancy or pregnancy-related medical conditions. For example, a doctor may tell a pregnant employee that she should not to lift more than twenty pounds or she should not to remain on her feet for extended periods of time. When pregnant employees are subject to limitations or restrictions because of pregnancy or pregnancy-related medical conditions, an issue that arises is whether employers must accommodate pregnant employees by providing them with light duty assignments or light duty positions. This issue was recently addressed by the U.S. Second Circuit Court of Appeals in Legg v. Ulster County, 820 F.3d 67 (2d Cir. 2016).

Discrimination Case Based On Failure To Provide Light Duty

In that case, Ann Marie Legg (Legg) brought a lawsuit for pregnancy discrimination in violation of Title VII of the Civil Rights Act of 1964, as amended by the Pregnancy Discrimination Act of 1978 (PDA). Legg worked as a corrections officer for the Ulster County Jail. The County maintained a policy under which employees injured on the job were eligible for light duty job assignments. The policy did not apply to pregnant employees. After Legg became pregnant, her doctor recommended that she work light duty because her pregnancy was high risk. The County denied Legg’s request and explained that light duty work was only available for employees who suffered work-related injuries. After the denial, a County employee informed Legg that he would take care of her by assigning her to light duty positions if she obtained a revised doctor’s note stating that she was able to work. Legg submitted the requested doctor’s note and was assigned light duty tasks. When approximately seven months pregnant, Legg came upon two inmates fighting in the bathroom and was bumped as one ran past her. As a result of this incident, Legg left work and did not return until after she gave birth. After she returned to work, Legg brought a lawsuit against the County claiming that the denial of her request for an accommodation constituted pregnancy discrimination. The trial court dismissed Legg’s pregnancy discrimination claim, reasoning that the County’s policy was not discriminatory because it was facially neutral with respect to pregnancy. The Second Circuit reversed and reinstated Legg’s pregnancy discrimination claim.

At the outset of its opinion, the Second Circuit explained that the PDA mandates that employers treat women affected by pregnancy, childbirth, or related medical conditions the same for all employment-related purposes as other non-pregnant employees who are similar in their ability or inability to work. Based on this mandate, the appellate court noted, the PDA “makes clear that it is discriminatory to treat pregnancy-related medical conditions less favorably than other medical conditions.” The appellate court also pointed out that a recent decision by the U.S. Supreme Court, Young v. United Parcel Service, 135 S.Ct. 1338 (2015), addressed how the PDA’s “same treatment” requirement applies to pregnancy discrimination claims under a disparate treatment theory of liability. Under a disparate treatment theory of liability, the pregnant employee is contending that she was treated differently and less favorably than non-pregnant employees. In order to state a prima facie case of pregnancy discrimination under a disparate treatment theory of liability, the Young Court held that a plaintiff must establish: (1) she was pregnant; (2) she sought an accommodation for her pregnancy or pregnancy-related medical condition; (3) the employer did not accommodate her; and (4) the employer accommodated other employees who were similar in their ability or inability to work.

First, the appellate court found that the County’s explanation for refusing to extend light duty accommodations to pregnant employees and for denying Legg’s request for an accommodation was riddled with inconsistencies. The County’s shifting explanations included that it did not believe in providing light duty accommodations to employees who were not injured on the job, it feared for the safety of Legg and the unborn child, and it was complying with state law in allowing employees injured on the job to be out and still receive pay.

Finally, the appellate court found that in admitting it was more costly to accommodate pregnant employees with light duty work because it would have to find someone else to fill the full duty position and pay them as well, the County’s justification impermissibly used cost as a factor for refusing to accommodate Legg’s pregnancy. In Young, the appellate court explained, the Supreme Court stated that an employer’s reason for refusing to accommodate pregnant employees “cannot consist simply of a claim that it is more expensive or less convenient to add pregnant women to the category of those similar in their ability or inability to work whom the employer accommodates.”

We have extensive experience representing individuals who have been the victim of pregnancy discrimination. If you have been discriminated against on the basis of pregnancy, or have questions regarding whether an employer is required to accommodate your pregnancy or pregnancy-related medical condition, please contact our office for a free consultation.